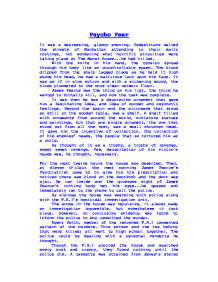 Psycho Fear It was a depressing, gloomy evening. Pedestrians walked the streets of Manhattan attending to their daily routines, not wondering what horrific atrocities were taking place at The Manor House...he had killed. With the knife in his hand, the tension spread through his body like an uncontrollable spasm. The blood dripped from the sharp jagged blade as he held it high above his head, he had a malicious look upon his face. It was as if in slow motion and with a sickening sound, the blood plummeted to the once clean ceramic floor. James Pearce was the third on his list, the third he wanted to brutally kill, and now the task was complete. It was then he saw a decorative ornament that gave him a fascinating idea, and idea of murder and psychotic feelings. Beyond the basin and the microwave that stood so still on the wooden table, was a shelf. A shelf filled with ornaments from around the world, miniature statues and paintings, but that one single ornament, the one that stood out from all the rest, was a small shrunken head. It gave him the incentive of collection, the collection of his enemies' heads, the people that so tortured him as a child. He thought of it as a trophy, a trophy of revenge, sweet sweet revenge. Yes, decapitation of his victim's heads was, he thought, necessary. For the next twelve hours the house was deserted. Then, at eleven O'clock the next morning James Pearce's Psychiatrist came by to give him his prescription and noticed there was blood on the doorknob and the door was ajar. He ran inside and the gruesome sight of James Pearce's rotting body met his eyes...he gasped and immediately ran to the phone to call the police. By mid-day the house was swarming with police along with the F.B.I's homicidal investigation unit. The aroma in the house was repulsive, it almost made an investigation impossible, but nonetheless it took place. ...read more.

I stood up and handed my seat to Pearce and sat in the corner of the room, a tear dripped down my face, it hurt inside. Later that day, after school, it was like the roads were made out of pure ice, and small puffs of snow slowly came down from the cloudy but blue sky. Winter had always been like this, Kids played in the deep white snow and sledged down the frosty streets, the songs were right, it is a winter wonderland. I made my way up 'School Avenue' passing the more sensible of children, it was all calm and peaceful, until my eyes set on Adam Reed and his gang. All happiness seeped away, where there's pleasure, there's always pain. He came closer. 'Oooh, look what the cat dragged in,' said Adam to his gang. They all laughed. I never could get to grasps with why Adam could never come out with a good joke, it was always something stupid and petty, but it wasn't intelligence that mattered to him, it was power, and he had it. 'Hey! Look at me when I talk to you Abdico!' Abdico was Latin for 'reject,' it was a kind of nick name for me around here. Though Latin is not widely spoken as much as it used to be, Adam's Gang would talk to each other in it sometimes, though, of course not fluently. 'Abdico! You dare ignore me! I'll break your legs if you don't answer!' 'Just leave me alone Adam, I've had enough,' I said, wishing I never had. I tuned and walked away. I closed my eyes as I walked, waiting for the painful blow. It came. 'Arrgh,' I screamed. Adam hit me in the kidney. I keeled over in pain and terror, staring at him with my bloodshot eyes. I crawled away from him, struggling to regain my breath, he'd knocked it clean out of me. ...read more.

'Mrs Perkins? The woman in the villa?' he said anxiously. 'Yes, yes, do you know her' 'Of course I know her, I look after her House and Garden,' Don said. 'So you're the cleaner then?' 'I prefer the term 'Preliminary Aspect Attendant' if you don't mind' 'Cool! so you clean... err I mean... Attend to the garden and house,' I stuttered. 'Absolutely right David, and If you want you can help me some days, and I'll teach you a little about the area, how's that Old Boy?' 'Great! Anyway I'll most likely see you tomorrow, I've got to go home now, It's getting late... Oh! and watch you don't step on the Monotropa Uniflora Don!' I said pleased with my pronunciation of the weird plant. 'Of course David, I won't, Bye now' he said whilst waving goodbye. Today, I said to myself, I think I experienced friendship. I liked it. I slept as snug as a bug all night, the warm humid air kept me from tossing and turning like I usually did at home, and by the time it was morning I felt like a newly blossomed flower, ready to take on anything the day has to offer. After breakfast and two of Grandmas freshly baked chocolate cookies I went outside to see if Don was doing any 'preliminary' work in the garden, luckily he was. It meant I didn't have to wonder around the village looking for him all day. 'Hi Don,' I said with a smile. 'Dag,' he replied. What does dag mean I thought, It must be Afrikaans or something. 'Doc? What does Dag mean.' 'You don't know what dag means? Why its Afrikaans of course!,' he said stunned. 'Yes...but what does it mean.' 'It means hello, what else do you think I would say to you when you say hello to me?' I walked closer to where he was working, It looked like he was pruning some colourful plants. 'Nice Plants,' I commented. 'Yes, Aren't they? There called African Violets, not such silly words this time my friend,' he said and giggled quietly. ?? ?? ?? ?? ...read more.