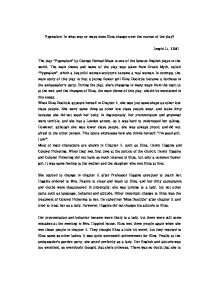 Pygmalion: In what way or ways does Eliza change over the course of the play?

Pygmalion: In what way or ways does Eliza change over the course of the play? Jung-hi Li, 11MJ The play "Pygmalion" by George Bernad Shaw is one of the famous English plays in the world. The main theme and name of the play was taken from Greek Myth, called "Pygmalion", which a beautiful woman sculpture became a real woman. In contrast, the main story of this play is that a young flower girl Eliza Doolittle became a duchess in the ambassador's party. During the play, she's changing in many ways from the start to at the end, and the changes of Eliza, the main theme of this play, should be mentioned in this essay. When Eliza Doolittle appears herself in Chapter 1, she was just same shape as other low class people. ...read more.

Pearce to clean and wash up Eliza, and her dirty appearance and cloths were disappeared. In physically, she was turning to a lady, but not other parts such as language, behavior and attitude. Other important change to Eliza was the treatment of Colonel Pickering to her. He called her 'Miss Doolittle' after chapter 2, and tried to treat her as a lady. However, Higgins did not change his attitude to Eliza. Her pronunciation and behavior became more likely to a lady, but there were still some mistakes at the meeting in Mrs. Higgins' house. Eliza met three people again when she met those people in chapter 1. They thought Eliza a little bit weird, but they reacted to Eliza same as other ladies. It was quite successful achievement for Eliza. Finally, at the ambassador's garden party, she acted perfectly as a lady. ...read more.

It was a serious gap for her. When her appearance changed a lot in many ways, her mind did not change so much. She still had strong mind on her, even after education for became a lady. That's why she was left Professor Higgins who did not mind on her, and married with Freddy, who care her more lovely than Professor Higgins. George Bernard Shaw portrays Eliza as a strong woman. From the beginning, she was just a common flower girl, which was lower class. However, after the lessons by Professor Higgins, she became a lady finally. During the lesson, she learned about English languages, the manners of the middle class, and behavior. She was confused what she is, but she had a strong mind on her, so she could overcome the gap. Whatever it changes, she is still Miss Eliza Doolittle! ...read more.

Exploration of Eliza's changing character is a good topic to cover; however unfortunately this is a very superficial anlaysis and there is no reference to structure which is important.