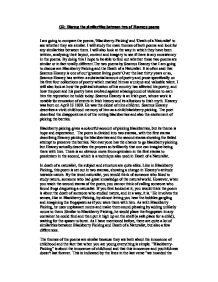 Q2: Discuss the similarities between two of Heaneys poems

Q2: Discuss the similarities between two of Heaneys poems I am going to compare the poems, 'Blackberry-Picking' and 'Death of a Naturalist' to see whether they are similar. I will study the main themes of both poems and look for any similarities between them. I will also look at the way in which they have been written, analysing their layout, content and imagery to see if there is any consistency in the poems. By doing this I hope to be able to find out whether these two poems are similar or in fact totally different.The two poems by Seamus Heaney that I am going to discuss are Blackberry Picking and the Death of a Naturalist. It is often said that Seamus Heaney is one of our 'greatest living poets' Over the last thirty years or so, Seamus Heaney has written a substantial amount of poetry and prose specifically on his first four collections of poetry which marked him as a unique and valuable talent. I will also look at how the political situation of his country has affected his poetry, and how the poet and his poetry have evolved against a background of violence to earn him the reputation he holds today. ...read more.

As I have mentioned before, there are quite a lot of similarities between Blackberry Picking and Death of a Naturalist, but also a few differences. The themes of the poems are similar because they are both about the innocence of childhood and the fact that when you are young everything is simple. "Blackberry-Picking" is about the innocence of childhood and that this innocence and youthfulness doesn't last forever. This is indicated by the lines in the last verse "we hoarded the berries in the byre. But when the bath wasfilled we found a fur," This shows that when the children had picked all they could carry they didn't know that they had to keep them cool because as soon as you pick something it starts losing its ripeness as soon as it comes off the branch and because the children placed them in a bath this shows they do not have the adult wisdom to show so they don't keep them cool and from that moment Seamus and his friends see that nature isnt only about life but about death as well. As we can see in Blackberry-Picking and Death of a Naturalist we can see that these are the times when Seamus comes to terms with the fact of life and the fact that everything isnt ...read more.

This shows Heaney that when there is a protective shield around you it can just disappear like a slap in the face and you wake up to the smell of rotting fruit and realise that you will die like these pieces of fruit in front of you and at this very moment people are dying and this would make anyone think "why?!" Heaney uses a lot of poetic devices in both poems some of which I shall explain now : there is pattern of three which is shown in Blackberry-Picking and is used to get an idea into your head and to show that Heaney has got the knoledge to use it. He uses a Military Overtone in Death of a Naturlist to show the frogs invading the flax dam to flush the other ones out to take over "the angry frogs Invaded the flax-dam;" Heaney shows that shows that the frogs a smart enough to realise they can have what they want and he knows that he shouldn't get in there way Heaney knows this because he is the Naturalist described inthis poem and the Death of the Naturalist inside him is when he does realise that things happen that other things don't like and this is the theme in Death of a naturalist that shows Heaney growing up. ...read more.