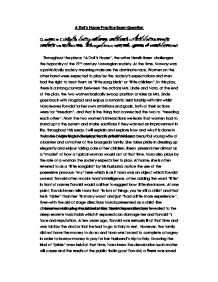 Question: Compare and contrast the characters of Nora and Ms Linde. What do we learn of the Norwegian society through their inter-actions?

A Doll's House Practice Exam Question Question: Compare and contrast the characters of Nora and Ms Linde. What do we learn of the Norwegian society through their inter-actions? Throughout the piece "A Doll's House", the writer Henrik Ibsen challenges the hypocrisy of the 19th century Norwegian society. At the time, Norway was a patriotically society meaning male are the dominate race. Women on the other hand were expected to play by the society's expectations and men had the right to treat them as "little song birds" or "little children". In this play, there is a strong contrast between the actions Mrs. Linde and Nora, at the end of the play, the two women basically swoop position or roles as Mrs. Linde goes back with Krogstad and enjoys a romantic relationship with him whilst Nora leaves Torvald for her own ambitions and goals. Both of their actions were for "freedom", and that is the thing that connected the two to "needing each other". From the two women's interactions we learn that women had to stand up to the system and make sacrifices if they wanted an improvement in life, throughout this essay, I will explain and explore how and why it is done in the case of the frictional characters in A Doll's House. ...read more.

Linde, however, the throughout the process we learn a lot about Nora through her actions. For example, we learn that Nora is capable in communicating in both child-like and serious language. When Nora challenges again the justice system "Hasn't a daughter the right to protect her dying father from worry and anxiety? Hasn't a wife the right to save her husband's life" it is shown that there is an intellectual side of the character Nora too. As Nora wakes to awareness that she has her own goals and ambitions which her current lifestyle would not be able to support, and that she has been living in a doll's house with a "strange men" for her entire life, even the bonding forces between Torvald and Nora - their three children does not prevent Nora from leaving. On the other hand, Mrs. Linde, a school-friend of Nora is as a widow of a loveless marriage and a working woman. On stage, her character is presented as a mature and experienced one. She seems to act as Nora's older sister and confidante whilst Nora attempts to resolve the problems. Arguably, Mrs. Linde was the reason of which Nora decided to leave. At the start of the play, she tells Nora what "tremendous fun" it was "sitting there working and earning money" and how it was "almost like being a man." ...read more.

Nora's departure means that she has to give up the warmth of the home and the finical and social security of being the wife of a reasonably wealthy man. Nora also has to leave her loving children. She knew that she cannot go for her ambitions and goals if she remains in the "Doll house". As for Mrs. Linde, she perhaps made her biggest sacrifice a few years before Nora, as she gave up her true romantic lover - Krogstad for a rich man for his money. This shows us how materialism and the importance of money were to Norwegians at the time. At current time of the play, Nora is giving up her physical freedom for a relationship with Krogstad, however, having seen the failed relationship between Nora and Torvald Nora should understand that her new relationship might end up the same. Throughout the interactions of the two women in A Doll's House, the ultimate actions of the two women was to step up and challenge themselves for an improvement in their lifestyles, both of them had to sacrifices comforts and safety however they believe that it is necessary for the "freedom" they want. Ibsen tells us that you have to fight for yourself in the cruel and realistic Norwegian Society, and that what ever you do sacrifice has to be made. To an extent, Ibsen conveys his feminist ideologies in the play and encourages the women to step up and challenge the system for change and reform. ...read more.