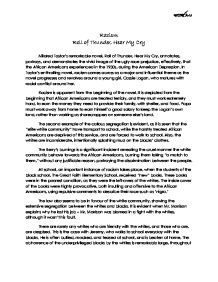 r****m Roll of Thunder, Hear My Cry Mildred Taylor's remarkable novel, Roll of Thunder, Hear My Cry, annotates, portrays, and demonstrates the vivid image of the ugly race prejudice, effectively, that the African Americans experienced in the 1930s, during the American Depression. In Taylor's enthralling novel, r****m comes across as a major and influential theme as the novel progresses and revolves around a young girl, Cassie Logan, who matures with racial conflict around her. r****m is apparent from the beginning of the novel. It is depicted from the beginning that African Americans are treated terribly, and they must work extremely hard, to earn the money they need to provide their family, with shelter, and food. Papa must work away from home to earn himself a good salary to keep the Logan's own land, rather than working as sharecroppers on someone else's land. The second example of the callous segregation is evident, as it is seen that the "elite white community" have transport to school, while the harshly treated African Americans are deprived of this service, and are forced to walk to school. ...read more.

It is evident when Mr. Morrison explains why he lost his job - Mr. Morrison was blamed in a fight with the whites, although it wasn't his fault. There are rarely any whites who are friendly with the whites, and those who are, are despised. This is the case with Jeremy, who walks to school everyday with the blacks. He is often bullied, mocked, and teased at school, and is beaten at home. The abhorrence of the underprivileged blacks by the whites is remarkably large, throughout the novel. As the novel progresses it is seen that Papa tries to explain to Stacey to hang out less with Jeremy, "We Logans don't have much to do with the white folks. You know why?" Papa says, believing that whites and blacks will never really be friends, "Cause white folks mean trouble," with this it also demonstrates hatred between the two races. ...read more.

TJ goes to a Barnett's store with his white "friends," to get himself the pearl handed pistol. At the shop, the whites - wearing a mask - kill Mr. Barnett, a white man. TJ Avery is immediately entirely blamed for the sequence of events. This shows, again, the law in much favour of the whites - as the police don't even look into the issue - they don't care who is guilty, but immediately find a black man to blame. If the roles had been reversed, circumstances and the events that took place would have been completely different. The whites simply want to punish some blacks, and they can do so easily, as no one dares to stop them. Throughout the story, there are several r****t remarks passed to the African Americans emphasizing the conditions they faced. Life for the African Americans in the 1930s was completely unjust. Judgment based solely on physical appearance exists, to date, and is still a controversial issue. ?? ?? ?? ?? Rohan M ...read more.