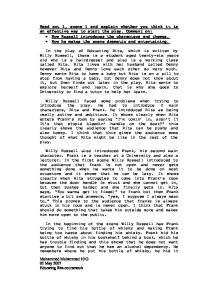 Read act 1, scene 1 and explain whether you think it is an effective way to start the play. Comment on - How Russell introduces the characters and themes. How he makes the scene dramatic and entertaining.

Read act 1, scene 1 and explain whether you think it is an effective way to start the play. Comment on: * How Russell introduces the characters and themes. * How he makes the scene dramatic and entertaining. In the play of Educating Rita, which is written by Willy Russell, there is a student aged twenty-six years old who is a hairdresser and also is a working class called Rita. Rita lives with her husband called Denny however Rita and Denny love each other so very much. Denny wants Rita to have a baby but Rita is on a pill to stop from having a baby, but Denny does not know about it, but then finds out later in the play. Rita wants to explore herself and learn, that is why she goes to University to find a tutor to help her learn. Willy Russell faced some problems when trying to introduce the play. He had to introduce 2 main characters, Rita and Frank. He introduced Rita as being really active and ambitious. It shows clearly when Rita enters Frank's room by saying "I'm comin' in, aren't I? It's that stupid bleedin' handle on the door?" this clearly shows the audience that Rita can be pushy and also bossy. I think that this gives the audience some thought of what Rita might be like in the rest of the play. ...read more.

This can be shown when Rita says, "You're my tutor. I don't want another tutor." Frank says, "But I've told you - I don't want to do it." I think that he does not want to take the opportunity and I also think that if he took the opportunity it would be a new challenge for him to compete over himself. Another theme, which Willy Russell introduced, was relationships. Some relationships that appeared in the first scene were Rita and her husband, Denny. Rita talks a bit about their relationship and tells Frank that Denny wants a baby but Rita has not told Denny that she is on a pill, which stops her from having a baby. Rita tells Frank that Denny keeps on asking her if she has come off the pill, and Rita says yes she has come off the pill just to make Denny shut up. Rita would like to learn before making choices such as having a baby with her husband Denny. She explains clearly to Frank about this by saying "I don't wanna baby yet. See, I wanna discover meself first." It shows to the audience that she is ambitious and wants to take choices after her education. I think that she is willing to give up anything just for her education and I also think that after her education she will make choices, which her husband will like and agree with such as having a baby and starting a family. ...read more.

Here Rita describes the erotic picture by using colloquial words by saying "tits" which the audience might find humorous and irreverent and Frank uses Standard English to describe the erotic picture. We can see that the way the both characters are speaking sounds like they are speaking two different languages. The device to show Rita is active is the handle on the door, which she struggles to open and enter Frank's room. An additional device to show that Rita is active is her oiling the door outside Frank's room. When Frank opens the door he is surprised at what Rita is doing and he did not expect it to be done. In conclusion I think Willy Russell made an effective way of starting the play because he had problems while trying to introduce the play, but for all the problems he had devices to support him and back up his ideas and also help him make his play. Willy Russell introduced the characters Rita and Frank by showing the audience what they are like and what they will be throughout the play. Willy Russell introduced the themes to the audience in an effective way too, he showed the audience that Rita wants Education and choices and that Frank wants relationship. Willy Russell makes the first scene dramatic and entertaining to the audience, which makes them stay to the very end and I also think that he made a good start to the play. Mohammed Mohammed 10 O 02 May 2007 Educating Rita coursework ...read more.