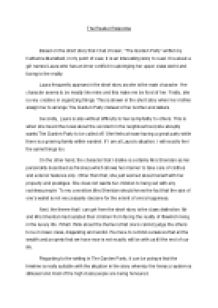 Reader response to The Garden Party written by Katherine Mansfield

﻿The Reader Response Based on the short story that I had chosen, ?The Garden Party? written by Katherine Mansfield, in my point of view, it is an interesting story to read. It is about a girl named Laura who has an inner conflict in upbringing her upper class world and facing to the reality. Laura frequently appears in the short story as she is the main character. Her character seems to be mostly like mine and this make me be fond of her. Firstly, she is very creative in organizing things. This is shown in the short story when her mother assign her to arrange The Garden Party instead of her brother and sisters. ...read more.

On the other hand, the character that I dislike is certainly Mrs Sheridan as her personality described as frivolous which shows her manner to take care of clothes and exterior features only. Other than that, she just worried about herself with her property and prestiges. She does not wants her children to hang out with any rackless people. To my conviction,Mrs Sheridan should know the fact that the size of one?s wallet is not neccessarily decisive for the extent of one?s happiness. Next, the theme that I can get from the short story is the class distinction. Mr and Mrs Sheridan had isolated their children from facing the reality of lifewhich living in the luxury life. ...read more.

Throughout the story, the author tries to brings up about the class distinction. Mrs Sheridan family symbolized the upper class social while the Scott?s family symbolized the lower class social.This is shown by the author when she described about Mrs Sheridan?s magnificent villa and Mr Scott?s living in a cottage with patching garden. Moreover, the author tries to tell the readers in facing reality. In this short story, Laura facing reality when she experiences that the worker?s life does not only consist happiness and pleasure but also hardship and suffering. In the nutshell, The Garden Party tells us about the fact of life and it is an enjoyable and interesting story to read. ...read more.