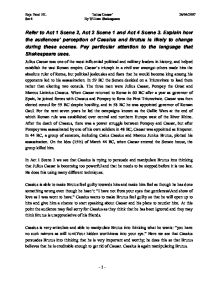 Refer to Act 1 Scene 2, Act 2 Scene 1 and Act 4 Scene 3. Explain how the audiences' perception of Cassius and Brutus is likely to change during these scenes

Refer to Act 1 Scene 2, Act 2 Scene 1 and Act 4 Scene 3. Explain how the audiences' perception of Cassius and Brutus is likely to change during these scenes. Pay particular attention to the language that Shakespeare uses. Julius Caesar was one of the most influential political and military leaders in history, and helped establish the vast Roman empire. Caesar's triumph in a civil war amongst others made him the absolute ruler of Rome, but political jealousies and fears that he would become king among his opponents led to his assassination. In 59 BC the Senate decided on a Triumvirate to lead them rather than electing two consuls. The three men were Julius Caesar, Pompey the Great and Marcus Licinius Crassus. When Caesar returned to Rome in 60 BC after a year as governor of Spain, he joined forces with Crassus and Pompey to form the First Triumvirate. Caesar was then elected consul for 59 BC despite hostility, and in 58 BC he was appointed governor of Roman Gaul. For the next seven years he led the campaigns known as the Gallic Wars at the end of which Roman rule was established over central and northern Europe west of the River Rhine. After the death of Crassus, there was a power struggle between Pompey and Caesar, but after Pompey was assassinated by one of his own soldiers in 48 BC, Caesar was appointed as Emperor. In 44 BC, a group of senators, including Caius Cassius and Marcus Junius Brutus, plotted his assassination. On the Ides (15th) of March 44 BC, when Caesar entered the Senate house, the group killed him. In Act 1 Scene 2 we see that Cassius is trying to persuade and manipulate Brutus into thinking that Julius Caesar is becoming too powerful and that he needs to be stopped before it is too late. He does this using many different techniques. ...read more.

We see that Brutus now seems like a very strong figure and this is in a complete contrast to what was seen in Act 2 Scene 1. Any suggestions given by Cassius are immediately dismissed by Brutus. When Cassius suggests that the conspirators should take an oath Brutus replies, "No, not an oath." We see that Brutus is very direct and disregards any idea of an oath because their cause is a noble one and in a noble cause one has no need to swear an oath to others: "Do not stain\The even virtue of our enterprise, Nor th'insuppressive mettle of our spirits, To think that or our cause or our performance Did need an oath". In the opinion of Brutus men should only take oaths when they doubt each other, but in a noble cause there should be no reason to doubt any of the conspirators' reasons for killing Caesar. Another idea dismissed by Brutus is when Cassius suggests that they assassinate Antony along with Caesar, but Brutus doesn't believe that it is necessary to kill him. It is noble to kill Caesar as they have a good reason but there is no good reason to kill Antony. As a result of this we are again reminded of the reasons for killing Caesar, Brutus' for the good of Rome and Cassius' to gain power for himself. We see that Brutus is thinking carefully over his decision to join the Caesar, even though he and Caesar have a strong relationship and have respect for one another he still needs to do what is right for Rome: "I know no personal cause to spurn at him, But for the general. He would be crowned. How that might change his nature, there's the question." Here Brutus is explaining that there is no personal reason to kill Caesar, but if he becomes king he cannot be sure whether that power will be used in the right manner or whether Caesar will abuse the power. ...read more.

What made it even more striking was the fact the ancestor of Brutus who established the Republic in Rome also had the name Brutus. The use of the word devil is also very strong as usually anything linked with the devil is evil. Here he could be trying to say that Caesar is the devil or that Brutus' ancestor would have done anything to keep Rome as a republic (even if the devil wanted to become king) and Brutus is just going to allow Caesar to become king without taking any action. The final sentence is: "Yond Cassius has a lean and hungry look; He thinks too much. Such men are dangerous." Here we see how clever Caesar is and how aware he is of the people around him. He was completely correct with his judgement of Cassius. It gives us the impression that Cassius is like a predator just waiting to pounce on any opportunity to gain more power. In conclusion in Act 1 Scene 2, we see that Cassius is very cunning, determined and intelligent and we see examples of this when he is attempting to manipulate Brutus to join the conspiracy. Brutus gives us the impression that he is very indecisive and hesitant; we also see that he is very quiet and that Cassius overrules him in the conversation; we do however go on to find out that Brutus isn't really like this. In Act 2 Scene 1, we see Brutus' true characteristics; he takes charge of the conspiracy and he is very commanding; Cassius steps down. Cassius is overwhelmed by Brutus' character and has to let Brutus take over. In Act 4 Scene 3 we see some negative characteristics of Brutus, he gets worked up and angry towards Cassius, he is self-righteous and can be somewhat hypocritical. We also see that Cassius cannot control his emotions (at one point he asks to be killed), we also see that he can become angry towards Brutus. ?? ?? ?? ?? Raja Patel 10L 'Julius Caesar' 26/04/2007 Set 6 By William Shakespeare - 1 - ...read more.