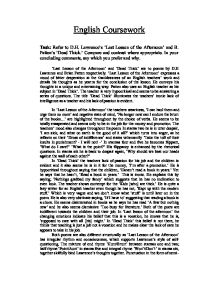 Refer to D.H. Lawrence's 'Last Lesson of the Afternoon' and B. Patten's 'Dead Thick.' Compare and contrast where appropriate. In your concluding comments, say which you prefer and why.

He is also very obstinate saying, 'If I have to' suggesting that reading a book is a chore. He seems disinterested in books as he says he has read 'A few but nothing new' and he also seems dismissive 'Too busy for literature.' Both of the poets are indifferent towards the children and their job. In 'Last lesson of the afternoon' the changing emotions indicate his belief that this is a vocation, he knows that he is, 'supposed to care with all [his] might.' In 'Dead Thick' this belief is not there, he thinks that teaching is just a job not a vocation and he makes clear the lack of care he appears to take in his job. Both poems are also different structurally as 'Last Lesson of the Afternoon' has irregular rhythm and consciousness, which supports Lawrence's style of self-questioning. The mixture of end rhyme 'Hunt/Brunt' between stanzas one and two; half rhyme 'Point/Aunt' in stanza five and integral rhyme 'Won't/Don't' in stanza six, together skilfully bind Lawrence's thoughts together. ...read more.

the 'Quarry' - the intended prey, the implication of being that is a matter of survival of the fittest in the classroom! Or, to 'Quarry' for knowledge means to extract facts laboriously from books which is ironic as these children have no interest in books and all that they offer is a 'Scrawl/Of slovenly work.' Patten's poem is more modern and conversational but less poetic and formal. It is colloquial in that 'Nothing's grabbed my fancy' and 'I haven't kept up with the modern stuff.' This is effective because it shows the teachers laziness in writing which is ironic because he is an English teacher. There is no real imagery in 'Dead Thick' we just get a sense that it is an interview 'What do I do? Teach. English. It's exhausting.' And the teacher is the person being interviewed. To conclude, I prefer 'Last Lesson of the Afternoon' because it is more poetic and more formal. It is more structured than 'Dead Thick,' which is a more colloquial and contains more relaxed language. ...read more.