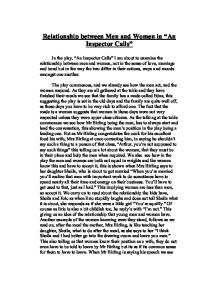 Relationship between Men and Women in "An Inspector Calls" In the play, "An Inspector Calls" I am about to examine the relationship between men and women, not in the sense of love, marriage and bond but in the way the two differ in their actions, ways and moods amongst one another. The play commences, and we already see how the men act, and the women respond. As they are all gathered at the table and they have finished their meals we see that the family has a made called Edna, this suggesting the play is set in the old days and the family are quite well off, as these days you have to be very rich to afford one. The fact that the made is a woman suggests that women in those days were not very respected unless they were upper class citizens. As the talking at the table commences we see how Mr Birling being the man, has to always start and lead the conversation, this showing the man's position in the play being a leading one. ...read more.

Of course as Eric is also a bit childish too, he reply's with "I'm not." This giving us an idea of the relationship that young men and women have. Another example of the women knowing were they stand, follows as we read on, after the meal the mother, Mrs Birling, is like teaching her daughter, Sheila, what to do after the meal, as she says to her "I think Sheila and I had better go into the drawing-room and leave you men." This also telling us that women know their position as a wife, they do not even have to be told to leave by Mr Birling but its as if its common sense for them to have to leave. When Mr Birling is saying his speech we see how serious the man over women rule really is, because normally when you are making a speech to congratulate your daughters engagement you would expect both the mother and father to be talking and congratulating her, but instead Mr Birling is the only one out of the two which stands up to say some words and again we see Mrs Birling is ...read more.

this showing that the men are not really meant to care even though the woman has just died because as long as he had no undertake in it, everything all right. When Gerald has admitted to having had an affair we see how Birling implies it's a common thing "Now, Sheila, I'm not defending him. But you must understand that a lot of men-" this tells us that the respect he has for women is not very high because if he can say that affairs are common within a man marriage, how must it be for the women. That quote also implies that he may have also had an affair in the past. Towards the end we see that instead of the men and women going against each other it's the other way round, except it's the older generation against the young, which is Mr Birling & Mrs Birling, and Sheila and Eric teaming up. The play finishes with the whole thing about the inspector being a hoax and then it really happens in reality, as if the past was being replayed. Throughout the play we mostly see the men doing the bad thing and the women covering up for them. ...read more.