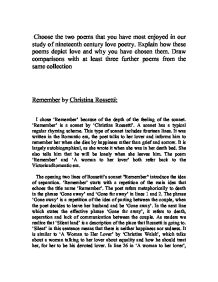 Choose the two poems that you have most enjoyed in our study of nineteenth century love poetry. Explain how these poems depict love and why you have chosen them. Draw comparisons with at least three further poems from the same collection Remember by Christina Rossetti: I chose 'Remember' because of the depth of the feeling of the sonnet. 'Remember' is a sonnet by 'Christina Rossetti'. A sonnet has a typical regular rhyming scheme. This type of sonnet includes fourteen lines. It was written in the Romantic era, the poet talks to her lover and informs him to remember her when she dies by happiness rather than grief and sorrow. It is largely autobiographical, as she wrote it when she was in her death bed. She also tells him that he will be lonely when she leaves him. The poem 'Remember' and 'A woman to her lover' both refer back to the Victorian/Romantic era. The opening two lines of Rossetti's sonnet "Remember" introduce the idea of separation. 'Remember' starts with a repetition of the main idea that echoes the title name 'Remember'. The poet refers metaphorically to death in the phrase 'Gone away' and 'Gone far away' in lines 1 and 2. The phrase 'Gone away' is a repetition of the idea of parting between the couple, when the poet decides to leave her husband and be 'Gone away'. In the next line which states the effective phrase 'Gone far away', it refers to death, separation and lack of communication between the couple. ...read more.

She goes on to say that it is better not to remember her if he is going to be sad every time he thinks about her. The effective sentence 'Do not grieve' is a command and 'Pray' provides evidence that her lover is a religious person. The two powerful words in the sestet 'Darkness' and 'Corruption' express the horror of physical death at the time. The word 'Vestige' means left over. The poet confers her conclusion that he should forget about her and smile rather than remember her and be sad. First Love by John Clare: I chose 'First Love' because it is similar to modern time ideas, although it was written in the 80's. 'First Love' is a poem by 'John Clare', it talks about a young man who was the son of a farmer and grew up in a rural area. It mainly shows us how his break up in an early relationship with a young woman called 'Mary Joyce' caused him to be deeply affected and he never got over it. The poem has a regular rhyming pattern and an ababcdcd rhyme scheme in all 3 stanzas with equal lengths of stanzas. This reflects his regular pattern of life which is a predictable routine. In other words this means that he will be in a state of shock if something unexpected happens. In the first line of the first stanza it says, "I ne'er was struck before that hour", this line informs us that the poet is physically and mentally in shock. ...read more.

and wonder how it could be so cold. The first two lines show us that metaphorically speaking he sees himself as 'Flowers', whereas his love is 'Snow'. This is The poet is wondering about how could his voice be silent, and it is proven using the oxymoron when the poet asks himself whether the girl could hear his 'Silent voice'. The poet describes his voice as silent to describe how he was deeply affected by the break up. The phrase 'Love's appeal to know' depicts love as an obsession and selfishness. The word 'Sweet' is repeated three times throughout the poem, in the fourth line before the end he uses alliteration with the word sweet to describe deeply 'So sweet a face'. As readers this makes us believe that he is now obsessed with her and can never get over it. In his attempt to reflect personification of his obsession he uses the phrase 'My heart has left', as if his heart can leave its place. There is also a shift intense from past to present in the last two lines where he first says in the past 'My heart has left' and then 'And can return no more', this informs us about the final condition that he is left with. Finally to end the poem the poet states the word 'can' in the phrase 'And can return no more' to hint to us that his heart has taken its own choice and decided not to go back for her. Rhetoricall questions in 3rd parg. Like in when we two parted ...read more.