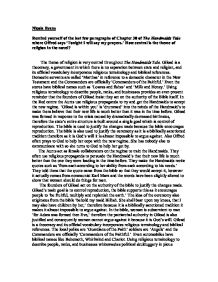 Remind yourself of the last few paragraphs of Chapter 30 of The Handmaids Tale where Offred says 'Tonight I will say my prayers.' How central is the theme of religion in the novel?

Nicola Evans Remind yourself of the last few paragraphs of Chapter 30 of The Handmaids Tale where Offred says 'Tonight I will say my prayers.' How central is the theme of religion in the novel? The theme of religion is very central throughout The Handmaids Tale. Gilead is a theocracy, a government in which there is no separation between state and religion, and its official vocabulary incorporates religious terminology and biblical references. Domestic servants are called 'Marthas' in reference to a domestic character in the New Testament and the Commanders are officially 'Commanders of the Faithful.' Even the stores have biblical names such as 'Loaves and fishes' and 'Milk and Honey.' Using religious terminology to describe people, ranks, and businesses provides an ever-present reminder that the founders of Gilead insist they act on the authority of the Bible itself. In the Red centre the Aunts use religious propaganda to try and get the Handmaids to accept the new regime. ...read more.

They told them that the quote came from the bible so that they would accept it, however it actually comes from communist Karl Marx and the words have been slightly altered to show that women should do things for men. The founders of Gilead act on the authority of the bible to justify the changes made. Gilead's main goal is to control reproduction, the bible supports this as it encourages people to 'be fruitful, multiply and replenish the earth.' The idea of the ceremony also originates from the bible 'behold my maid Bilhah. She shall bear upon my knees, that I may also have children by her,' therefore because it is a biblically sanctioned tradition it makes it almost impossible to argue against. In the bible, woman is subservient to man 'for Adam was formed then Eve,' therefore the patriarchal authority in Gilead is also justified and consequently women cannot argue against it because it is God's will. ...read more.

Even though the founders of Gilead justify their actions through the bible Offred knows it's not what God intended. She tells God 'I don't believe for an instant that what's going on out there is what You meant,' because she knows he wouldn't allow women to be persecuted in this way. Religion is a major theme throughout the novel. Religious terminology is used to describe people, ranks and businesses which provides a reminder that the founders of Gilead insist they act on the authority of the Bible itself. Religious propaganda is used by the Aunts to try and get the Handmaid's to accept the regime. Also the bible justifies the changes that have been made because the ceremony and the demand for reproduction both originate from the bible. Therefore the use of the bible to justify the changes made makes it almost impossible for anyone to argue against them because it is seen as God's will. However even though the bible is used as a justification Offred believes that what is happening is not exactly what God intended as he would not allow women to suffer in this way. ...read more.