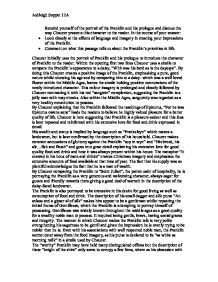 Remind yourself of the portrait of the Franklin and his prologue and discuss the way Chaucer presents this character to the reader.

Remind yourself of the portrait of the Franklin and his prologue and discuss the way Chaucer presents this character to the reader. In the course of your answer: * Look closely at the effects of language and imagery in creating your impressions of the Franklin. * Comment on what this passage tells us about the Franklin's priorities in life. Chaucer initially uses the portrait of Franklin and his prologue to introduce the character of Franklin to the reader. Within the opening first two lines Chaucer uses a simile to compare the Franklin's appearance to a daisy, "Whit was his berd as is the dayesye". By doing this Chaucer creates a positive image of the Franklin, emphasising a pure, good nature whilst showing his age and by comparing him to a daisy- which was a well loved flower within the Middle Ages, leaves the simile holding positive connotations of the newly introduced character. This colour imagery is prolonged and closely followed by Chaucer contrasting it with his red "sangwin" complexion, suggesting the Franklin is a jolly man with rosy cheeks. Also within the Middle Ages, sanguinity was regarded as a very healthy constitution to possess. By Chaucer explaining that the Franklin followed the teachings of Epicurus, "For he was Epicurus owene sone" leads the readers to believe he highly valued pleasure for a better quality of life. ...read more.

The "worthy" Franklin may have held many distinguished offices but the description of these "knight of the shire" only seem to occupy a few lines, where as his obsession with food and drink is told in great detail over 21 lines and that seems to be the Franklins main concern and highest priority, whereas his duty as Sheriff in the county seems to be an inferior concept. This can help to influence the readers' opinion of the Franklin more negatively as it links with connotations to greed. The idea that the Franklin has prioritised his life wrong is repeated later when he talks about his son, and wishes he was something else like the squire. The Franklin's desperation for his son to change and behave in a nobler manner is shown when he says he would give up his wealth for it to be the case as "Fy on possessioun// But if a man be virtuous withal!" This is a striking thing for the Franklin to say as the reader has already been made aware about his obsession with his wealth and what it leads to. This can be lead to the Franklin be interpreted in a bad manner yet again, as his greed could be partly held responsible for his sons addiction to gambling, "pleye at dees, and to despende". ...read more.

This is highlighted when the Franklin tries to create many impressions and illusions of himself and his background to his audience during his speech, but really the truth is different from what he implies it to be. For example his enthusiasm to be overly polite suggests his keenness to confirm to gentil behaviour. This can be seen when the Franklin goes to great lengths to flatter the squire "thou hast thee well yquit". This behaviour also hints that he is not as high in the social standing as he would prefer to be and maintains an air of elusiveness, as everything may not always be as it seems. Within the portrait of the Franklin and his prologue, Chaucer spends great time explaining about his characters traits and personality, introducing him to the reader and allowing them to receive background knowledge on him early on so they can form initial opinions of him and feel more involved with the story. He is portrayed in a positive light initially with the use of similes and comparisons to well respected patron saints but then can be seen in a more negative manner as Chaucer presents him a very self obsessed way, as he seems to think to highly of himself and attempts to be overly humble and generous. This however can be seen to backfire upon his character, as it creates the opposite impression of him than he had intended. ?? ?? ?? ?? Ashleigh Soppet 12A ...read more.