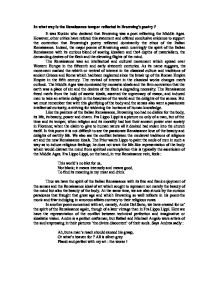 In what way is the Renaissance temper reflected in Browning's poetry ? It was Ruskin who declared that Browning was a poet reflecting the Middle Ages. However, other critics have refuted this statement and offered conclusive evidence to support the contention that Browning's poetry reflected dominantly the ethos of the Italian Renaissance. Indeed, the major poems of Browning catch unerringly the spirit of the Italian Renaissance with its curious blend of soaring idealism and the4 depths of materialism, the demanding desires of the flesh and the elevating flights of the mind. The Renaissance was an intellectual and cultural movement which spread over Western Europe in the fifteenth and early sixteenth centuries. As its name suggests, the movement marked the rebirth or revival of interest in the classical culture and traditions of ancient Greece and Rome which had been neglected since the break up of the Roman Empire Empire in the fifth century. The revival of interest in the classical works changes men's outlook. The Middle Ages was dominated by monastic ideals and the firm conviction that the earth was a place of sin and the desires of the flesh a degrading necessity. ...read more.

At the same time, we are also struck by the curious paradoxes that fraught that great age and which Browning so well reflects in his poem-the monk and friar indulging in amorous affairs contrary to their religious vows. In another poem concerned with art, namely, Andre Del Sarto, we have created for us' the spirit of the Renaissance again, though of a later vintage than in Fra Lippo Lippi. Here we have the representation of the conflict between technical perfection and imaginative or idealistic vision. Andre is a perfect craftsman, but Rafael and Michael Angelo were artists of the soul expressing in their pictures 'the divine discontent' of their souls. Says Andrea sadly : Ah, but a man's reach should exceed his grasp, Or what's heaven for ? All is silver-grey Placid and perfect with my art : the worse ! The words imply that the great art of the period reflected the striving of the mind for higher regions, the fire of passion and glory of man's spirit through flamboyant colours-all of which, sadly, was not within reach of Andre. ...read more.

The diverse features of the complex age are exquisitely captured. The Bishop wishes for luxurious gifts for his sons if his directions were carried out, and these gifts reflect the age's love of beauty, precious manuscripts, horses and grand houses. There is revealed all its love of colour, pomp and show as well as its greed and sensuality, as De Vane remarks. The basic Renaissance spirit-its world liness, inconsistency, pride, hypocrisy, ignorance of self, love of art, of luxury, and of good Latin find apt expression in this poem. We are places in the full decadence of the Italian Renaissance. Its total loss of religion even in the church; its immorality-the bishop's deathbed is surrounded by his natural sons and the wealth he leaves has been purchased by every kind of iniquity-its pride of life, its luxury; its semi Paganism; its imitative classicism; its inconsistence; its pleasure in the adornment of death, its delight in the outsides of things and mere workmanship; its loss of originality; its love of scholarship and beauty for their own sakes; its contempt to common people; its exhaustions-are one and all revealed or suggested in this poem. We have in many of Browning's poems the reflection of the Renaissance, both in its nobler aspects and in its decadent aspects. ...read more.