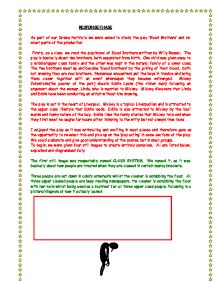 Response phase - as part of our Drama Portfolio we were asked to study the play 'Blood Brothers' and re-enact parts of the production.

RESPONSE PHASE As part of our Drama Portfolio we were asked to study the play 'Blood Brothers' and re-enact parts of the production. Firstly, as a class we read the play/novel of Blood Brothers written by Willy Russell. The play is basically about two brothers, both separated from birth. One child was given away to a middle/upper class family and the other was kept in the natural family of a lower class. The two brothers meet up and become 'blood brothers' by the joining of their blood, both not knowing they are real brothers. Numerous encounters put the boys in trouble and bring them closer together until an event whereupon they become estranged. Mickey Johnstone(the poorer of the pair) shoots Eddie Lyons (the richer man) following an argument about the woman, Linda, who is married to Mickey. Mickey discovers that Linda and Eddie have been conducting an affair without him knowing. The play is set in the heart of Liverpool. Mickey is a typical Liverpudlian and is attracted to the upper class lifestyle that Eddie leads. Eddie is also attracted to Mickey by the 'cool' words and funny nature of the boy. Eddie likes the funny stories that Mickey tells and when they first meet he laughs for hours after listening to the witty but not always true tales. I enjoyed the play as it was enthralling and exciting in most places and therefore gave us the opportunity to re-enact this and pick up on the 'play acting' in some sections of the play. We could elaborate and give good understanding of the scenes, but in small groups. To begin, we were given four still images to create entirely ourselves. All are listed below, explained and diagrammed fully. The first still image was respectably named CLASS SYSTEM. We named it, as it was basically about how people are treated when they are classed in certain money brackets. ...read more.

The dole man replies "Take it or leave it." Mickey replies "I'll tek it but it aint enough," Mickey stands up and looks at Eddie in the parallel scene and says "I need to see Eddie again." Mickey acts as if he has seen Eddie but is actually looking right through him. The other parallel act comes to life once again. They advance towards one another again and Mickey says "twas so reassuring to 'ear is voice again." The finger is now pointed at Eddie to show that the flashback will begin, starting with Mickey. Mickey rings Eddie and seems to be depressed, he rings him out of self-pity and is hoping for a bit of reassurance from his best mate. Eddie answers the phone, also depressed. They both shout the others name and seem relieved. Mickey says "How are ya Ed" "I'm fine replies Eddie, and the Uni is great, there is booze, girls and loads of laughs." There is a pause, and after about fifteen seconds Mickey says "I'm in jail." "What for?" demands Eddie. " I took part in an armed robbery, it was Sammy he needed a door man." At this point Mickey breaks down into tears and says "I need ya 'ere Ed." Eddie sighs and says "which one is it?" Mickey sobs and says "what." Eddie now sounds tougher and says "which prison are you in you big goof." Mickey sniffs and says "Hunchester Gaylin in Blackpool." Eddie replies "I'll make an appointment to see you next week sometime, ok?" Mickey nods and says "Uhhuh. Bye then." Eddie sympathetically says "It is for a week bud, see you" The other parallel scene opens for the last time. Mickey and Eddie both say in conjunction with one another "that was last week." The whole act closes as they meet one another and sit to talk. DEVELOPMENT The opening act for the development phase of Blood Brothers is based on the parents of Eddie, Mr and Mrs Lyons. ...read more.

After a while Mickey says "I stopped taking the pills...those pills. Eddie nods in reply obviously not thinking about what he just said. After a few moments Eddie says " Linda and I ARE just friends...and just friends. Immediately after this is said Mickey jumps to his feet and yells in his face "Blood Brothers wasn't it...WASN'T IT? I thought I was going to shoot you...going to shoot"...At this point Mickey produces a gun and rams it into Eddies jaw and repeats his line again "Blood Brothers wasn't it." Eddie jumps up and at the same time both Eddie and Mickey say to one another "you had a twin brother." Both look startled and in anger Mickey shoots Eddie. The police appear and put several bullets into the chest of Mickey. Mickey is blown across the room by the impact of the bullets. Both boys fall to the floor and the scene closes. In conclusion to this small and once again abstract, I feel that it produced some real life drama at the same time of it being very sketchy. It showed what could have been said when they met for the final time. Throughout the scene the pace/tempo was constantly being changed. It started out very slow but speeded up as the scenes progressed. The mood started off quite warm and happy and turned darker and more 'edgy' as the scenes progressed. The movement was very still to start but got more 'moving' as the play moved forward. The movement however did not get smoother but it got very jittery and fast in the matter of only a few seconds. I feel however that this scene was one of our best performances because it was very abstract but at the same time realistic. Overall I feel that the drama exam was a success as we could portray the parts of all characters and main aspects of the play quite sufficiently and successfully due to the fact that we each got issued a Bloodbrothers novel/play to work from. ...read more.