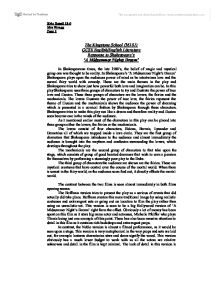 The Kingstone School (36101) GCSE English/English Literature Response to Shakespeare's 'A Midsummer Nights Dream' In Shakespearean times, the late 1500's, the belief of magic and mystical going-ons was thought to be reality. In Shakespeare's 'A Midsummer Night's Dream' Shakespeare plays upon the audiences power of mind as he intertwines love and the surreal fairy world with comedy. These are the main themes in the play and Shakespeare tries to show just how powerful both love and imagination can be. In this play Shakespeare uses three groups of characters to try and illustrate the power of true love and illusion. These three groups of characters are the lovers, the fairies and the mechanicals. The lovers illustrate the power of true love, the fairies represent the theme of illusion and the mechanicals shows the audience the power of dreaming which is presented in a comical fashion by Shakespeare through these characters. Shakespeare tries to make this play run like a dream and therefore reality and illusion soon become one in the minds of the audience. As I mentioned earlier most of the characters in this play can be placed into three groups either the lovers, the fairies or the mechanicals. The lovers consist of four characters, Helena, Hermia, Lysander and Demetrius all of which are trapped inside a love circle. They are the first group of characters that Shakespeare introduces to the audience and almost immediately the audience is brought into the mayhem and confusion surrounding the lovers, which develops throughout the play. ...read more.

The crowd that has gathered then begins to laugh and no one goes to comfort him or try and catch the kids that poured the wine, they just stand and laugh at him. In the noble version he is portrayed as a larger than life character that everyone appears to love. The actor that has been cast to play this part, who is larger than any other actor in the film, reinforces this larger than life character. The nest group of characters that Shakespeare throws upon the audience are the fairies, which I mentioned earlier. He takes the audience straight to the heart of the fairy world by showing the King and Queen of fairies, Oberon and Titania. They appear to be having a fight, or a lover tiff and this appears to have a direct affect on the mortal world as when they are arguing the weather is wet and stormy. Also because of this argument between the King and Queen the rest of the fairy world is seen to be in disorder. This is shown in the Hoffman version by their being a party and fairies getting drunk and causing general chaos within the fairy world. In Shakespearean times there were only a limited amount of props that Shakespeare could use during his play therefore he had to transport the audience to the fairy world using their imagination. Shakespeare only had a fraction of what is available to use today in his plays and therefore heavily relied on the audience power of imagination and his ability to create a place by using mere words. ...read more.

than the Hoffman version but not a wide spread basis, the film will never be nominated for a BAFTA award or anything of that sort because of its low budget. Where as the Hoffman version has a much higher budget and will therefore appeal to filmgoers rather than people who like to watch Shakespeare on stage. Because of its glamour, lush background and expensive actors I feel that the Hoffman is more magical because Hoffman is able to use whatever set he pleases or go out on location and 'doll' up a place to his satisfaction, Noble I don't think never had that luxury. I think it is more magical because the of setting that Hoffman presents with the film, for example when the audience is taken into the woods and the fairy land I think that the tree in which they are partying appears quite magical. I also feel that the Hoffman version is more romantic because the actors and actresses are always quite close to each and the opening scene illustrates this in the Hoffman version where Hermia, Lysnander and Helena are all pressed closed together. Overall I think that the Noble version is better because I like the way in which Noble has presented the mechanicals and feel that it is more light hearted than the Hoffman version. I also think that the Hoffman version has tried too hard to create the sets that Shakespeare writes about throughout the play and at times is a bit over the top with the backgrounds. Kyle Bonell 11-0 Mrs Wragg Page 1 ...read more.