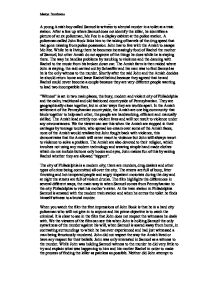 Review Of The Film "Witness" A young Amish boy called Samuel is witness to a brutal murder in a toilet at a train station. After a line up where Samuel does not identify the killer, he identifies a picture of an ex policeman, Mc Fee in a display cabinet at the police station. A policeman called John Book links him to the taking of barrels of the drug speed that had gone missing from police possession. John has to live with the Amish to escape Mc Fee. While he is living there he becomes increasingly fond of Rachel the mother of Samuel, but other Amish do not approve of the things he does while he is staying there. The way he handles problems by resulting to violence and the dancing with Rachel to the music from his broken down car. The Amish farm is then raided where John is staying, the raid carried out by Schaeffer and his men was to find Samuel as he is the only witness to the murder. Shortly after the raid John and the Amish decides he should return home and leave Rachel behind because they agreed that he and Rachel could never become a couple because they are very different people wanting to lead two incompatible lives. "Witness" is set in two main places, the busy, modern and violent city of Philadelphia and the calm, traditional and old fashioned countryside of Pennsylvanian. They are geographically close together, but in other ways they are worlds apart. In the Amish settlement of the Pennsylvanian countryside, the Amish are one big community that binds together to help each other, the people are hardworking, efficient and manually skilled. ...read more.

Schaeffer losses his nerve and does not go through with it and surrenders his weapons. The argument shows that John had learnt from the Amish, that problems can be solved in other ways then using violence. The writer of a film uses words to create a sense of character, mood and atmosphere. The makers of the film uses action, dialogue, camera shots and angles, sound effects and music. "Witness" is made up with cleverly constructed scenes, which merge together film techniques to create the designed effect. In the scene where Samuel witnesses the killing, the tension is built up by using close up camera shots, the silence of the characters, the sound effects and the build up, pounding and quickly changing music. From the time Samuel enters the toilet there is no dialogue, as Samuel walks towards the toilet cubical he passes a man (later found to be a policeman) washing in a sink, as Samuel walks past him he is greeted with a smile. Mc Fee and his side kick enters the toilet, Mc Fee stays at one end of the toilet while his sidekick walks to the other. All that could be heard was the running of the water and the policeman washing, this and the split between the two character gives the impression to the viewer that something is going to happen, giving the viewer a sense of tension. Mc Fee makes eye contact with his sidekick and gives him a node of the head to indicate to him to proceed with the murder. The sidekick then violently covers the policeman's head with a blanket, the fast moving music then cuts in which builds up tension along with the fast moving characters. ...read more.

The role Harrison Ford plays in "Witness" is different from the role he is usually associated with, he usually plays the part of the action man and has a far more violent role than the one he has in "Witness". Harrison Ford usually uses violence throughout the film, unlike "Witness" only using violent in key parts of the film where violence is required. A good example where Harrison Ford uses violence throughout the film and plays the part of an action man is the film "Blade Runner", here he takes the role of a policeman of the future, who hunts down and terminates replicants, artificially created humans. Kelly McGinnis has not starred in as many well know films as Harrison Ford but has starred in "Top Gun". The role she plays in "Top Gun" is very different from the role she plays in "Witness". In "Witness" she plays the caring mother living in an Amish village, where no modern machinery is used, everyone is very religious and only plain and simple clothes are worn. When in "Top Gun", she plays the part of a modern, sexy and tough businesswoman. The role Kelly McGinnis plays in "Top Gun" is the conventional female stereotype played in many modern films. Overall I thought "Witness" belonging to the thriller genre was an extremely good film. But as my favourite genre being comedy, I did not enjoy "Witness" as much as if it would have been a comedy for example Mr Bean or South Park. Even so I could recognise the cleverly constructed scenes, the authentic characters and the techniques used to build up the tension made "Witness" an above average film of the thriller genre. ?? ?? ?? ?? Martyn Dunthorne ...read more.