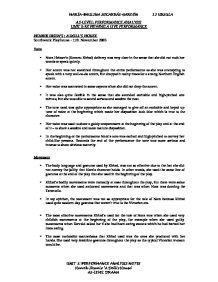 AS-LEVEL: PERFORMANCE ANALYSIS UNIT 3: REVIEWING A LIVE PERFORMANCE HENRIK IBSEN'S : A DOLL'S HOUSE Southwark Playhouse - 11th November 2003 Voice * Nora Helmer's (Kananu Kirimi) delivery was very clear in the sense that she did not rush her words or speak quietly. * Her accent was not sustained throughout the entire performance as she was attempting to speak with a very well-to-do accent, but dropped it many times for a strong Northern English accent. * Her voice was mannered in some aspects when she did not drop the accent. * It was also quite flexible in the sense that she sounded excitable and high-pitched one minute, but she was able to sound serious and sombre the next. * The tone used was quite appropriate as she managed to give off an excitable and keyed up tone of voice at the beginning which made her disposition look fake which is true to the character. * Her voice was used to show a giddy temperament at the beginning of the play and at the end of it - to show a sombre and more mature disposition. * In the beginning of the performance Nora's tone was excited and high-pitched to convey her child-like persona. Towards the end of the performance the tone was more serious and intense to show obvious maturity. Movement * The body language and gestures used by Kirimi, was not so effective due to the fact she did not convey the jollity that Nora's character holds. In other words, she used the same line of gestures at the end of the play that she used in the beginning of the play. * Kirimi's bodily movements were normally at ease throughout the play, but there were some moments when she used awkward movements and that was when Nora was dancing the Tarantella. * In my opinion, the movement was not so appropriate for the role of Nora because Kirimi used quite modern day gestures that weren't true to the Victorian era. ...read more.

Because the audience we so cramped in, it felt as though we were actually inside the room with the characters. I do not believe that the set itself was positioned to communicate a certain scale of the room but instead to literally draw the audience member into the life of the play. COSTUME * All the characters were dressed in Victorian form that by no other means illustrated that the period was indeed Victorian. The difference in costumes also highlighted the difference in class and social background. Nora mainly wore a typical Victorian middle-class Day dress, Torvald; a double-breasted frock coat with a waist coat. Dr. Rank also wears a double-breasted frock coat but much most old-fashioned than Torvald's. Christine Linde wore a plain grey dress draped over by a rustic looking, heavy knitted brown shawl. Krogstad wore a dark coloured suit and a dark over-coat. * All the characters were dressed in lifeless colours throughout most of the play to convey the stringency of the despotic society in which they all had to live. Even though Nora's character seems to be far from dull and sombre, we are given an insight, at the start of the play, into Nora's true nature. * The costume that is the most prominent is that of Nora's Tarantella dress. It was a burgundy red dress with black additions that instantly shows passion as the Tarantella itself is a very passionate dance. This costume also reveals the increasingly potent anger bubbling inside Nora. * All the men are dressed in similar style clothing as they are all, roughly speaking, of the same social ranking. The only difference between the men is the colours they wear. Whilst Dr. Rank and Torvald sport complete grey suits communicating their sheer uniformity (in the case of Dr. Rank, showing that he is indeed a doctor) and professionalism. Krogstad, in contrast wears a much darker suit to draw attention to his growing inner darkness. ...read more.

In fact, Dr. Rank does have a disease that is the result of his father's depravity. Dr. Rank implies that his father's immorality-his many affairs with women-led him to contract a venereal disease that he passed on to his son, causing Rank to suffer for his father's misdeeds. Torvald voices the idea that one's parents determine one's moral character when he tells Nora, "Nearly all young criminals had lying mothers." He also refuses to allow Nora to interact with their children after he learns of her deceit; for fear that she will corrupt them. Yet, the play suggests that children too are obligated to protect their parents. Nora recognized this obligation, but she ignored it, choosing to be with and sacrifice herself for her sick husband instead of her sick father. Mrs. Linde, on the other hand, abandoned her hopes of being with Krogstad and undertook years of labour in order to tend to her sick mother. Ibsen does not pass judgment on either woman's decision, but he does use the idea of a child's debt to her parent to demonstrate the complexity and reciprocal nature of familial obligations. I neither agree nor disagree with the play's intended message as I believe that not only have thing changed radically for women in the past 150 years, but I also believe that woman are still not classified as completely equal to men. This transgression will take a lot more time to prove successful as it is impossible to wish for a change in attitudes overnight. In some aspects, even today, women are still seen as second class, and this is the exact point the play was attempting to communicate. In other words this interpretation was trying to show that even though the appearance of the world may have changed drastically during the past 150 years; human beings still obtain the same strengths and weaknesses, attitudes to society and hierarchical mentality. MAR�A-PAULINA SOCARR�S-GARZ�N 12 URSULA UNIT 3: PERFORMANCE ANALYSIS NOTES Henrik Ibsen's: 'A Doll's House' AS-LEVEL DRAMA ...read more.