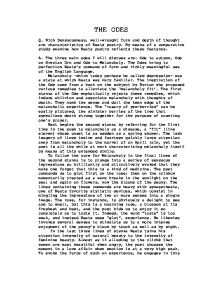 Rich Sensuousness, well-wrought form and depth of thought are characteristics of Keats poetry. By means of a comparative study examine how Keats poetry reflects these features.

THE ODES Q. Rich Sensuousness, well-wrought form and depth of thought are characteristics of Keats poetry. By means of a comparative study examine how Keats poetry reflects these features. A. The three main odes I will discuss are: Ode to autumn, Ode on Grecian Urn and Ode to Melancholy. The Odes bring to perfection Keats's command of form and richly meaningful use of the English Language. Melancholy -which today perhaps he called depression- was a state at which Keats was very familiar. The inspiration of the Ode came from a book on the subject by Burton who proposed various remedies to alleviate the 'melancholy fit'. The first stanza of the Ode emphatically rejects these remedies, which induce oblivion and associate melancholy with thoughts of death. They numb the sense and dull the keen edge of the melancholic experience. The "rosary of yew-berries" can be easily pictured, the sinister berries of the tree that symbolizes death strung together for the purpose of counting one's prayer. Keat begins the second stanza by referring for the first time in the poem to melancholy as a disease, a "fit" (line eleven) whose onset is as sudden as a spring shower. The lush imagery of lines twelve and fourteen quickly lures attention away from melancholy to the marvel of an April rain, yet the poet is all the while at work characterizing melancholy itself by means of this extended simile. To follow the cure for Melancholy in the final lines of the second stanza is to plunge into a series of sensuous impressions so brilliantly and attractively evoked that they make one forget that this is a kind of medicine. ...read more.

As he did at the very beginning of the poem, Keats in the fifth stanza addresses he has traveled by comparing the titles that he gave the urn itself rather than the figures upon it. Now the poet seems ready to answer some of the questions that he flung out at the urn in wonder. Were its figures men or gods? What was this "leaf-fring'd legend" on the urn's face? The answer is direct figures are a "brede", that is, embroidery or decoration; not living persons at all, nor gods, but only "marble men and maidens". And the human figures share the urn with nothing more extraordinary than "forest branches and the trodden weed". This is not to say that instance, is a rare word - not often to be found outside of poetry - and rareness is felt throughout the passage. The poet shows us how much he can do with a single word in his use of "overwrought". The men and maidens are "overwrought" birth in the sense that they have been worked into or wrought upon the face of the urn and in the sense they are overexcited by their passion. The urn is "overwrought" that is filled to excess, taxed almost to the bursting point with the figures upon it. The 'Sylvan historian' gave us a picture of human life, Greek life in particular but did not provide the associated facts which we tend to regard as history. ...read more.

But the images of departure and death are only lightly touched upon and carry with them the implications of renewal as the revolution of the seasons goes on. The Odes display a fine descriptive power and a concentrated richness of expression. Other poems of his contain richly sensuous writing but this tends to be a matter of decorative elaboration which detracts from the subject of the poem. Here the word pictures are integral to the poem and a wealth of detail is concentrated into a few words often boldly used; nothing is redundant, nothing can be spared. The epithets ' cool-rooted' and 'fragrant-eyed' in 'Psyche' compress many images into a very few words; 'to bend with apples the moss'd cottage-trees' ('to Autumn') conjures up a vivid picture of a cottage garden with long-established trees laden with fruit and the phase 'cottage-trees' to mean 'trees in a cottage garden' is highly original use of language: 'the coming musk-rose, full of dewy wine' ('To Nightingale') contains ideas of freshness, yet maturity ('full') and heady intoxication ('musk', 'wine') The stanzaic form of the great Odes seems so natural and inevitable. The ten-line stanza of the Odes has a firmness and clarity of structure without inflexibility of rhyme: a quatrain (abab) gives anchor to the verse and is followed by variable sestet (generally cdecde) which allows the verse room to expand ('To Autumn' replaces the sestet by a septet which gives the stanza an appropriately fuller quality. Hence we see, that Keats exploited the angularity of the English language and we see his poetry reflects rich sensuousness, well-wrought form and depth of thought. ...read more.