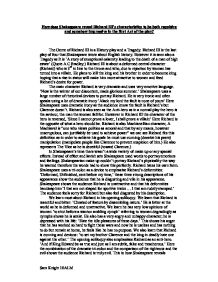 Richard III how is he repulsive and impressive

How does Shakespeare reveal Richard III's characteristics to be both repulsive and somehow impressive in the first Act of the play? The Genre of Richard III is a History play and a Tragedy. Richard III is the last play of four that Shakespeare wrote about English history. However it is seen also a Tragedy as It is 'A story of exceptional calamity leading to the death of a man of high estate' (Quote A C Bradley.) Richard III is about a deformed central character (Richard) who is 3rd in line to the throne and who, due to rejection by woman has turned into a villain. He plans to kill the king and his brother in order to become king hoping that a rise in status will make him more attractive to women and feed Richard's desire for power. The main character Richard is very dramatic and uses very emotive language. 'Now is the winter of our discontent, made glorious summer.' Shakespeare uses a large number of rhetorical devices to portray Richard. He is very ironic and often speaks using a lot of dramatic irony 'Alack my lord the fault is none of yours' Here Shakespeare uses dramatic irony as the audience know the fault is Richard's but Clarence doesn't. ...read more.

He also has a very angry and unhappy character; he is depressed with his life: 'Hate the idle pleasures of these days.' This shows his anger that he has worked so hard to fight these wars and now he is useless and has nothing to do but remain at home, he feels like he has no purpose. We also learn that Richard is cunning and devious: 'to set my brother Clarence and the king in deadly hate one against the other.' The opening soliloquy also emphasizes Richard as an anti-hero. 'And if King Edward be as true and just as I am subtle, false and treacherous.' Here the combination of the dramatic tri-colon and the comparison of the righteous and the evil shows the audience Richard is truly evil. This is how Shakespeare reveals Richard to be both repulsive and impressive. This is shown as he has a horrible deformed figure, yet he plans to kill the two men in line to the throne. This disgusts and impresses the audience at the same time. In the rest of Act 1 Scene 1 more of Richard's characteristics are revealed to the audience. His ability to be manipulative is shown in this scene as he has successfully made Clarence think that the reason he's being sent to the tower is the fault of the queen: 'I think there is no man secure. ...read more.