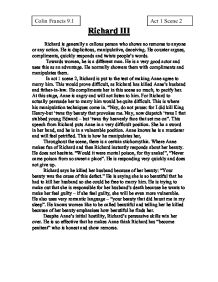 Richard III In act 1 scene 2, Richard is put to the test of making Anne agree to marry him. This would prove difficult, as Richard has killed Annes husband and father-in-law.

Richard III Richard is generally a callous person who shows no remorse to anyone or any action. He is duplicitous, manipulative, deceiving. He counter argues, compliments, quickly responds and twists people's words. Towards women, he is a different man. He is a very good actor and uses this as an advantage. He normally showers them with compliments and manipulates them. In act 1 scene 2, Richard is put to the test of making Anne agree to marry him. This would prove difficult, as Richard has killed Anne's husband and father-in-law. He compliments her in this scene so much, to pacify her. At this stage, Anne is angry and will not listen to him. For Richard to actually persuade her to marry him would be quite difficult. This is where his manipulation techniques come in. "Nay, do not pause: for I did kill King Henry-but 'twas thy beauty that provokes me. ...read more.

He is trying to make out that she is responsible for her husband's death because he wants to make her feel guilty - if she feel guilty, she will be even more vulnerable. He also uses very romantic language - "your beauty that did haunt me in my sleep". He knows women like to be called beautiful and telling her he killed because of her beauty emphasises how beautiful he finds her. Despite Anne's initial hostility, Richard's persuasive skills win her over. He is so effective that he makes Anne think Richard has "become penitent" who is honest and show remorse. In act 4 scene 4, Richard talks to Elizabeth in a different tone in contrast to Anne. He doesn't shower her with compliments but he gives her ideas of thoughts that could be achieved if she agrees to make her daughter marry him. ...read more.

She is not frightened of him, so he cannot threaten her and, in any case, he needs her help to marry her daughter. He realises he can't get anywhere with her by being so clever, so he decides to persuade her by talking about what she will get out of allowing him to marry her daughter: wealth, status, grandchildren, he son allowed to return from exile. For the first time in the play, he has to treat someone as an equal. Richard's treatment of Anne in the first extract is different to the treatment of Elizabeth in the second in several ways: He showers Anne with compliments; he talks to Elizabeth about advantages of her daughter marring him; his conversation to Anne is a lot faster and rapid than the one to Elizabeth. manipulative 1. stichomythia 2. deceives 3. Twists their words. 4. Counter argues 5. Quickly responds 6. Duplicitous 7. compliments 8. innocent 9. arrogance ...read more.