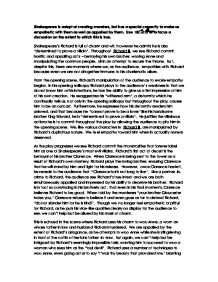 Shakespeare is adept at creating monsters, but has a special capacity to make us empathetic with them as well as appalled by them. Use Richard III to focus a discussion on the extent to which this is true. Shakespeare's Richard is full of charm and wit, however he admits he is also "determined to prove a villain". Throughout Richard III, we see Richard commit horrific and appalling acts - betraying his own brother, wooing Anne and manipulating the common people, all in an attempt to secure the throne. But, despite this, there are moments where we, as the audience, empathise with Richard because even we are not altogether immune to his charismatic allure. From the opening scene, Richard's manipulation of the audience to evoke empathy begins. In his opening soliloquy Richard plays to the audience's weakness in that we do not know him or his intentions, he has the ability to give us a first impression of him of his own creation. ...read more.

When Clarence is being sent to the tower as a result of Richard's own mastery, Richard plays the loving brother, ensuring Clarence that he will stand by him and fight for his release. However, once Clarence has left, he reveals to the audience that "Clarence hath not long to live". Like a partner-in-crime to Richard, the audience see Richard's true intent and we are both simultaneously appalled and impressed by his ability to deceive his brother. Richard is in fact so convincing in his brotherly act, that even in his final moments, Clarence believes Richard to be good. When told by the murderers "your brother Gloucester hates you," Clarence refuses to believe it and even goes as far to defend Richard, "do not slander him for he is kind!". Though we no longer feel empathetic or pitiful for Richard, as he puts his vice-like qualities clearly on display for the audience to see, we can't help but be allured by his mask of charm. ...read more.

When Anne leaves, Richard expresses his glee at achieving what seemed to be an impossible feat saying "was ever a woman in this humour won?....Ha!". It is wishful thinking to believe Richard truly loves Anne and he makes this clear to the audience, telling us "she won't live long". During the verbal battle between Richard and Anne we are sucked in by Richard's theatricality and charm. Only when he confides in the audience his intent to get rid of Anne do we see the true level of his malice. Shakespeare creates both a monster we are appalled by and a man of charm who we are intrigued by. Richard gains the sympathy of the audience in the opening soliloquy but as the play proceeds his mask of charm fractures. We are intrigued by him, but we also see the monster beneath. In the end, he is a character we both love and hate. ...read more.