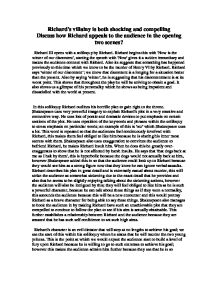 Richard's villainy is both shocking and compelling

Richard's villainy is both shocking and compelling Discuss how Richard appeals to the audience in the opening two scenes? Richard III opens with a soliloquy by Richard. Richard begins this with 'Now is the winter of our discontent', starting the speech with 'Now' gives it a sudden immediacy and makes the audience connect with Richard. Also its suggests that something has happened previously to this time which we know to be the murder of Henry VI by Richard. Richard says 'winter of our discontent'; we know that discontent is a longing for a situation better than the present. Also by saying 'winter', he is suggesting that his discontentment is at its worst point. This shows that throughout the play he will be striving to obtain a goal. It also shows us a glimpse of his personality which he shows as being impatient and dissatisfied with the world at present. In this soliloquy Richard outlines his horrific plan to gain right to the throne. Shakespeare uses very powerful imagery to explain Richard's plot in a very emotive and connective way. ...read more.

This further establishes a relationship between Richard and the audience because they are amazed that he has such self confidence to set such high aims. Richard's character is an evil dictator that will stop at no lengths to achieve his goal; we see the start of this within his soliloquy where he states that he will murder the two young princes. This is the point at which we would expect the audience start to build a level of fury upon Richard because he is willing to go to such extremes to achieve his goal; however this makes the audience admire him further because they see that he is so determined. Richard is the villain of the play, a villain is described as the person who opposes the hero. In Richard III there is not a defined hero until the latter parts of the play. This means that in the play Richard has to play the anti-hero which means he will have the same characteristics of a textbook hero, like determination and courage, but have opposing aims. ...read more.

Shakespeare's play could have been biased towards Richmond in making Richard more deformed than he was in real life. Richard as the protagonist would have been made more deformed to suggest a connection between the devil and himself. This connection would be forged because in Elizabethan time's association with the devil was shown through deformity which was considered as a punishment by god. Richmond would have been displayed as a greater person than he actually was to please the monarchy In describing Richard Shakespeare tends to alike him to an animal, this suggest that he is very savage, this is describing his actions as inhuman and can only be related to the way an animal behaves. Anne says that Richard is a hedgehog in the Elizabethan era this was considered as an insult. Richard can be closely compared to some of the modern tyrannical leaders. Saddam Hussein is much similar to Richard in that they both will do whatever it takes to reach their final aim. Neither have much regard for others lives because they will both kill without thought nor did they both think they were above the law in their eras. ...read more.