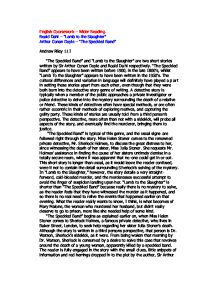 English Coursework - Wider Reading. Roald Dahl - "Lamb to the Slaughter" Arthur Conan Doyle - "The Speckled Band" Andrew Riley 11 I "The Speckled Band" and "Lamb to the Slaughter" are two short stories written by Sir Arthur Conan Doyle and Roald Dahl respectively. "The Speckled Band" appears to have been written before 1900, in the late 1800's, whilst "Lamb To the Slaughter" appears to have been written in the 1950's. The cultural differences and variation in language will definitely have played a part in setting these stories apart from each other, even though that they were both born into the detective story genre of writing. A detective story is typically when a member of the public approaches a private investigator or police detective to delve into the mystery surrounding the death of a relative or friend. These kinds of detectives often have special methods, or are often rather eccentric in their methods of exploring motives, and capturing the guilty party. These kinds of stories are usually told from a third person's perspective. The detective, more often than not with a sidekick, will probe all aspects of the story, and eventually find the murderer, bringing them to justice. "The Speckled Band" is typical of this genre, and the usual signs are followed right through the story. Miss Helen Stoner comes to the renowned private detective, Mr. Sherlock Holmes, to discuss the great distress to her, since witnessing the death of her sister, Miss Julia Stoner. She requests Mr. Holmes' assistance in finding the cause of her sisters untimely demise in a totally secure room, where it was apparent that no-one could get in or out. This short story is longer than usual, as it would leave the reader confused, were it not to contain the detail surrounding Sherlock's solving of the mystery. In "Lamb to the Slaughter," however, the story details a very straight- forward, cold-blooded murder, and the murderesses successful attempt to avoid the finger of suspicion landing upon her. ...read more.

The story begins by setting the scene. It describes the ambience of the room, "The room was warm and clean, the curtains drawn, the two table lamps alight - hers and the one by the empty chair opposite." It describes the love felt by Mary Maloney as she waited for her husband to return home from his work as a police detective. She made her and Patrick a drink, and enquired as to what he would like to eat. Patrick didn't want to eat, as he had something of the highest importance that he needed to tell Mary, who was with child. It begins like this to show a sense of love and normality around Mary and Patrick's marriage and home. The most dramatic point in the story, from my point of view, is when she raises the leg of lamb above her head, and brings it down as hard as she can on the back of his head. Roald Dahl keeps the reader engaged in the story, even though we know who the murderer is, by keeping us hanging on for the fate of Mary Maloney, who in the readers eyes committed a crime of passion. The reader wishes to know whether she will be able to dispose of the evidence, and whether she will go to prison, or face the death penalty, which was still being used at the time in which the story is set. The story ends with Mary phoning the police after a trip out to the grocers, as an alibi, and they come to investigate this seemingly senseless bludgeoning of a fellow policeman. Mary ends up putting the only piece of evidence that could link her to the crime, the leg of lamb, in the oven, and letting the investigating officers eating it, therefore disposing the only thing that could have proved that she carried out the murder, in the days before DNA and forensic testing. ...read more.

Roald Dahl tells us more of what Mary is thinking because a reader can respond and empathise when we know a characters thoughts and feelings. I think that Mary and Patrick were quite stereotypical of the British population in the 1950's, when a man would go out to work, and a woman would stay and make home, cleaning and cooking, but not with the killing, obviously. I don't think that there is any distinction between good and evil here, as the reader builds up an image of a woman under pressure, but the police would be looking for an evil minded cold blooded killer, as popular culture was on Mary's side, and no-one would suspect a timid little wife in those days, especially not one that was married to a police officer. Roald Dahl makes his characters seem normal by documenting the normal things that a young couple would do, like when Mary gets Patrick a drink, asks him as to what he wants for supper, and whether he would like his slippers fetching. Everything is normal about this couple, but that all changes when Mary murders Patrick. Apart from Patrick's terrible news for Mary that is the only abnormal thing in their relationship up to that point. Even though these stories are classed to be in the same genre, and that is detective stories, I would say that they are at opposite ends of the scale. The only similarity that I would note is that both of the stories involve murder. I don't think that you can really criticise a Sherlock Holmes story in the detective genre, because Holmes simply is the detective genre. He started it off, and probably is the world's greatest sleuth. I preferred "The Speckled Band" out of the two stories due to its depth and complex storyline, whereas "Lamb to the Slaughter" is a bit too short for me, even thought that it is meant to be a short story, after all, but I must say I prefer more twists and turns in such a tale, and "The Speckled Band" provides that for me. ...read more.