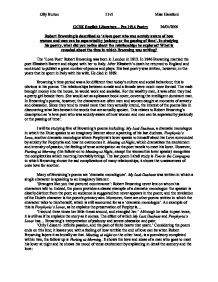 Robert Browning is described as 'a love poet who was acutely aware of how women and men can be separated by jealousy or the passing of time'. In studying his poetry, what did you notice about the relationships he explores?

Sections of the poem come in fairly regular iambs, but this often breaks down: just as the poet can't quite capture either his ideas or his lover, he can't quite conquer language either. Porphyria's Lover, however, while natural in its language, does not display the colloquialisms or dialectical markers of some of Browning's later poems. Moreover, while the cadence of the poem mimics natural speech: 'Murmuring how she loved me -she too weak, for all her heart's endeavour,' it actually takes the form of highly patterned verse, rhyming ABABB. The intensity and asymmetry of the pattern suggests the madness concealed within the speaker's reasoned self-presentation. On the other hand, My Last Duchess comprises rhyming pentameter lines. The lines do not employ end-stops; rather, they use enjambment - that is, sentences and other grammatical units do not necessarily conclude at the end of lines. Consequently, the rhymes do not create a sense of closure when they come, but rather remain a subtle driving force behind the Duke's compulsive revelations. The Duke is quite a performer: he mimics others' voices, creates hypothetical situations: 'She rode with round the terrace - all and each would draw from her alike the approving speech, Or blush, at least. She thanked men, - good!' and uses the force of his personality to make horrifying information seem merely colourful. Meeting at Night includes two verses, the first of which explains the scenery of his journey and relates to his lover to meet: 'As I gain the cover with pushing prow'; the second verse part explains the scenery once with his lover and the emotions he feels. ...read more.

Meeting at Night and Parting at Morning I didn't really get at first, however, once I read through them thoroughly... I realised that it was actually quite cleverly done and that Browning could have been a little clearer, but he's not very obvious in any of his poems. Finally, Two in the Campagna I considered it excellent, I loved the way Robert Browning compared Love to art and how he used Campagna as the setting. Since Browning's speakers are male, a discussion of male identity requires a yardstick i.e. an indication of his perception of a female identity, to base on in order to form a more concrete and persuasive argument. In "Childe Roland", the conspicuous absence of a female voice may suggest a representation of a specifically male identity through the speaker. On the other hand, doubts remain whether he intended to psychoanalyse the male identity for a particular poem, as no female voice exists for a comparison. The central problem in Browning's love poetry is invariably one of communication between the sexes. The intangible influences that encourage or destroy intimacy between men and women elicit all his skill in psychological analysis; for love exists in and through human intuitions. Reference has already been made to the poet's belief that destined lovers recognize each other on first sight. But these moments of full and perfect communion are precarious; and, save for the most exceptional cases, the initial harmony does not survive social pressures or the importunities of individual temperament. Olly Burton 11v1 Miss Hansford ...read more.