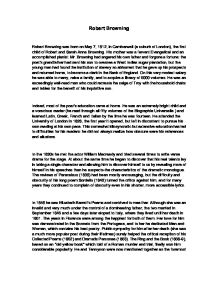 Robert Browning, The reniassance and The Duke of Ferrara

Robert Browning Robert Browning was born on May 7, 1812, in Camberwell (a suburb of London), the first child of Robert and Sarah Anna Browning. His mother was a fervent Evangelical and an accomplished pianist. Mr. Browning had angered his own father and forgone a fortune: the poet's grandfather had sent his son to oversee a West Indies sugar plantation, but the young man had found the institution of slavery so abhorrent that he gave up his prospects and returned home, to become a clerk in the Bank of England. On this very modest salary he was able to marry, raise a family, and to acquire a library of 6000 volumes. He was an exceedingly well-read man who could recreate the seige of Troy with the household chairs and tables for the benefit of his inquisitive son. Indeed, most of the poet's education came at home. He was an extremely bright child and a voracious reader (he read through all fifty volumes of the Biographie Universelle ) and learned Latin, Greek, French and Italian by the time he was fourteen. ...read more.

The years in Florence were among the happiest for both of them. Her love for him was demonstrated in the Sonnets from the Portugese, and to her he dedicated Men and Women, which contains his best poetry. Public sympathy for him after her death (she was a much more popular poet during their lifetimes) surely helped the critical reception of his Collected Poems (1862) and Dramatis Personae (1863). The Ring and the Book (1868-9), based on an "old yellow book" which told of a Roman murder and trial, finally won him considerable popularity. He and Tennyson were now mentioned together as the foremost poets of the age. Although he lived and wrote actively for another twenty years, the late '60s were the peak of his career. His influence continued to grow, however, and finally lead to the founding of the Browning Society in 1881. He died in 1889, on the same day that his final volume of verse, Asolando, was published. He is buried in Poet's Corner of Westminster Abbey. The reniassance About 1450, European scholars became more interested in studying the world around them. ...read more.

When Alfonso d'Este (1486-1534) became the Duke of Ferrara in 1505, he was as ambitious as any Renaissance prince, achieving wealth and influence through alliances with France and Spain against the Pope. Alfonso married the controversial Lucrezia Borgia who was the daughter of the Pope and who was falsely accused of poisoning her previous husband and of incestuous relations with her father. Alfonso created at Ferrara a truly magnificent court, attracting there famous writers (Ariosto), poets (Petrarch) and painters (Bellini & Titian). For his palace at Ferrara, Alfonso commissioned art from the most gifted artists of the age, the jewel of his collection being a painting by Giovanni Bellini, the acknowledged leader of Venetian art. The Feast of the Gods was the last painting which Bellini was to complete before his death in 1516. The Duke's art collection was to become famous and the Feast of the Gods was its centerpiece. The painting depicted a bacchanal described in the writings of Ovid, and the other paintings in the collection portrayed related mythological episodes. To create a grand theme and a unified design for the series, Isabella d'Este, Duchess of Mantua and Alfonso's sister, lent Alfonso the services of Mario Equicola, one of the most admired classical scholars of the Renaissance. ...read more.