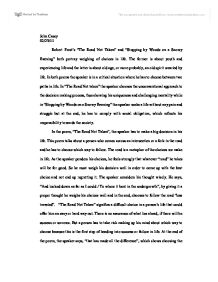 Robert Frosts The Road Not Taken and Stopping by Woods on a Snowy Evening both portray weighing of choices in life. The former is about youth and experiencing life and the latter is about old age,

John Casey 02/23/11 Robert Frost's "The Road Not Taken" and "Stopping by Woods on a Snowy Evening" both portray weighing of choices in life. The former is about youth and experiencing life and the latter is about old age, or more probably, an old spirit wearied by life. In both poems the speaker is in a critical situation where he has to choose between two paths in life. In "The Road Not taken" the speaker chooses the unconventional approach to the decision making process, thus showing his uniqueness and challenging mentality while in "Stopping by Woods on a Snowy Evening" the speaker seeks a life without any pain and struggle but at the end, he has to comply with social obligation, which reflects his responsibility towards the society. In the poem, "The Road Not Taken", the speaker has to make a big decision in his life. This poem talks about a person who comes across an intersection or a fork in the road and he has to choose which way to follow. ...read more.

By choosing the harder path, the speaker declares his rebellion against the popular opinion as represented by the other road. He decides not to conform to society and takes up a less popular choice. When considering his choices the speaker shows the typical human reaction. He considers taking both paths at first. He says, "Oh I kept the first for another day", but later confesses he "doubted if [he] should ever come back" (13-15). Thus the poem's significance lies in the speakers making a decision by choosing a road and moving on with his life. The act of choosing the road represents his uniqueness and the fact that he is always moving forward, even without stopping. Like "The Road Not Taken", in "Stopping by Woods on a Snowy Evening", the speaker has to make a big decision in his life. He has to choose between isolation and social obligation. At first glance, this poem might denote stopping in the woods to escape the hustle and bustle of city life. ...read more.

Meanwhile, the speaker is considering going back but at the same time, he sees how nice the "wind" is and how it could blow away all his woes and worries. In the end, the speaker realizes that "dark and deep" wood and "frozen lake" (13-14), which represent death, is not his answer. He has promises to keep. He does actually connect to life and therefore decides to keep journeying on. He has many things to do; many miles go to before he stops. Presumably, the social responsibility proves stronger that the attraction of the isolated woods, which are "lovely" as well as "deep and dark" (13). Robert Frost's "The Road Not Taken" and "Stopping by Woods on a Snowy Evening" provide us contrasting and sometimes similar glimpses of life. "The Road Not Taken" is about taking control and living life. "Stopping by Woods on Snowy Evening" entails the desire for rest, perhaps due to the speaker's feelings of weariness from facing life's struggles. The poet also explains the tough choices people stand before when traveling the road of life. Sometimes people regret the possibilities of the road not chosen, sometimes people feel proud about the road they have chosen. ...read more.