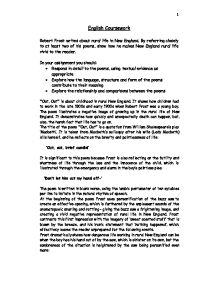 Robert Frost writes about rural life in New England. By referring closely to at least two of his poems, show how he makes New England rural life vivid to the reader.

English Coursework Robert Frost writes about rural life in New England. By referring closely to at least two of his poems, show how he makes New England rural life vivid to the reader. In your assignment you should: * Respond in detail to the poems, using textual evidence as appropriate * Explore how the language, structure and form of the poems contribute to their meaning * Explore the relationship and comparisons between the poems '"Out, Out"' is about childhood in rural New England. It shows how children had to work in the late 1800s and early 1900s when Robert Frost was a young boy. The poem illustrates a negative image of growing up in the rural life of New England. It demonstrates how quickly and unexpectedly death can happen, but, also, the harsh fact that life has to go on. The title of the poem '"Out, Out"' is a quotation from William Shakespeare's play 'Macbeth'. It is taken from Macbeth's soliloquy after his wife (Lady Macbeth) kills herself, and he reflects on the brevity and pointlessness of life: 'Out, out, brief candle!' ...read more.

As the poem ends, it appears more sinister as Frost reflects on the young boy dying and the pointlessness of life through the illustration of sinister words such as 'the dark of either'. The dashes create effective pauses as the boy takes his last breath, helping to highlight the hardness of rural life to the reader. 'Little-less-nothing!-and that ended it.' The tone of the poem is relaxed and casual in the beginning, but changes after the boy's sister tells them '"Supper."' The tone becomes tenser and appears to be insensitive due to Frost's bluntness about death. 'And they, since they Were not the one dead, turned to their affairs.' However, Frost is stating the harsh fact of life - that it has to go on for people to survive, even after a terrible grievance. I think this fact is particularly true for rural life in New England at this time. This is because farms still had to be looked after to ensure the farmer got money to support himself and his family, therefore, they could not afford to stop everything - it was not that they did not care about the death of the young boy. ...read more.

For Frost, the birch trees are a way to escape the pressures of being grown up. The poem shows how he is yearning to climb the birch trees once again and metaphorically escape from the earth. 'I'd like to go by climbing a birch tree' The poem has a casual tone, just as '"Out, Out"' but 'Birches' maintains this casual and relaxed tone throughout unlike '"Out, Out"' which changes to a more sinister tone. The tone of 'Birches' does become more when Frost personifies fate to misunderstand him: 'May no fate wilfully misunderstand me' Although the tone of 'Birches' becomes more philosophical it still maintains a casual tone. The casual tone in 'Birches' of the poem is captured by the colloquial language that is used. 'But I was going to say . . .' After reading and studying both '"Out, Out"' and 'Birches' I prefer 'Birches' as I feel it makes rural life in New England more vivid. I think '"Out, Out"' is a more sinister and negative approach to look upon rural life. But, Frost illustrates a more vivid image through the use of alliteration throughout 'Birches' which creates a more real and vivid representation than '"Out, Out"'. ?? ?? ?? ?? 1 ...read more.