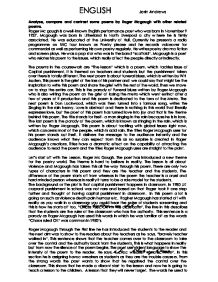 ENGLISH Jerin Andrews Analyse, compare and contrast some poems by Roger Mcgough with other related poems. Roger Mc gough is a well-known English performance poet who was born in November 9 1937. Mcgough was born in Litherland in North Liverpool a city where he is firmly associated. He was educated at the University of Hull. Currently he presents a radio programme on BBC four known as Poetry please and he records voiceover for commercial as well as performing his own poetry regularly. He writes poetry drama fiction and screen plays. He was a pop star who was in the band "scaffold". Mcgough is a poet who relates his poem to the issues, which really affect the people directly or indirectly. The poems in the coursework are "The lesson" which is a poem, which tackles issue of Capital punishment. It is themed on teachers and students but the punishment taken over there is totally different. The next poem is about funeral blues, which is written by WH Auden. This poem is the grief of the loss of his partner and we could say that might be the inspiration to write this poem and share the grief with the rest of the world. Then we move on to stop the entire car. This is the parody of Funeral blues written by Roger Mcgough who is also writing the poem on the grief of losing the metro which went extinct after a few of years of it production and this poem is dedicated to the fans of the Metro. The next poem is Don Lockwood, which was then turned into s famous song, writes the Singing in the rain heavy. Love is abstract and there is nothing in this world that literally expresses love, but the poet of this poem has turned love into joy and that is the theme behind this poem. The title stands for itself- a man singing in the rain because he is in love. ...read more.

This sentence asking the policemen to wear black cotton gloves is a sign of respect and honour giving to the body but in the real world no one is doing it. Next is when someone die you would inform the relatives and share the grief but the poet uses a different way to convey the message to the world. He says "Scribbling on the sky the message he is dead". This sentence shows that he is doing the maximum to get peoples attention and he wants people to share his grief with the people but here is no one out there in the world who cares about the death of the lover of the poet. The first two stanzas of the poem were all about the command and to do this and that. He wanted the things he said to be done but the stanzas in the last two stanzas rather than using imperatives for it he uses a different theme and create that imagery mood over there. He describes to people that the lover was everything to him. Every second of his life he enjoyed living with his lover. He describes to people that by saying "He was my North, my south, my east and west". The poet is saying that he was everywhere, wherever he goes his lover was with him as the poet goes "He was my working week and Sunday rest". That describes that the poet wherever he was the lover as with him always. Then the pattern he created was different as the penultimate stanza it described all the love and emotion of the love and now to the last stanza it goes back again to commands but there is a difference he makes and it is that in the first and second stanza it is all about man made things and which is about our environment as aeroplanes policeman clocks etc but he is making a command to the nature as he says "Pack up the moon and dismantle the sun; pour away the ocean and dismantle the wood". ...read more.

In the lesson the most attracted thing to me is the immense amount of violence Roger Mcgough brought into it with all the death and blood but he didn't keep the poem raw but added humour and pun such as "First come first severed" and this was an interesting point in the poem. The authority that changes from student to the teacher and the gap of time and the words were able to attract the audience. These all are the features that made the lesson my favourite poem. The poem funeral blues written by WH Auden who was in great grief about the loss of his partner and he gave the relief to it by expressing his feeling and emotions to the world. Now to the poem stop all the cars, which were written by Roger Mcgough who gave a glimpse of hope to the fans of the cat metro, which had to stop production due to its bad review on health and safety measures. Mcgough gave hope to the fans that it was not a bad car but had the capability to attract peoples the poem was a big success. No ending it on the singing on the rain and stinging on the rain. The poem stinging on the rain was by Don Lockwood, which was a famous song. It was about a man dancing on the rain enjoying rather than many other people who were angry and disappointed with it. He enjoyed the train so much because he was in love and the great depth of love made him that rain more excited than usual and stinging in the rain id the parody of the poem, which tackles with global issues such as Acid rain and how this would affect people and exaggerating about it. Love is a concept which Roger Mcgough explores in several different poems of his. The concept of love is so intricate that the ways to express the feelings by writing it is hard but Roger Mcgough was successful. Overall the poems had great techniques and each of them was unique due to the wonderful characteristics. ...read more.