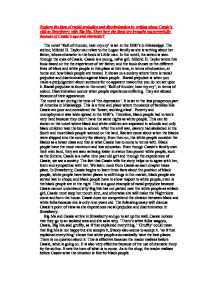 Roll of thunder - Explore the idea of racial prejudice and discrimination by writing about Cassie's visit to Strawberry with Big Ma. Show how the ideas are brought out powerfully because of Cassie's age and character?

Explore the idea of racial prejudice and discrimination by writing about Cassie's visit to Strawberry with Big Ma. Show how the ideas are brought out powerfully because of Cassie's age and character? The novel 'Roll of thunder, hear my cry' is set in the 1930's in Mississippi. The author, Mildrid D. Taylor can relate to the Logan family as she is writing about her father, whose character in the book is Little man. In the novel, the action is seen through the eyes of Cassie. Cassie is a young, na�ve girl. Mildrid D. Taylor wrote this book based on the the experience of her father, and the book shows us the different lives of black and white people in this place at this time, in terms of education, at home and how black people are treated. It shows us a society where there is racial prejudice and discrimination against black people. Racial prejudice is when you make a prejudgement about someone for no apparent reason but you do not act upon it. Racial prejudice is shown in the novel, 'Roll of thunder, hear my cry', in terms of colour. Discrimination occurs when people experience suffering. They are abused because of their appearance. The novel is set during the time of 'the depression'. It is set in the less prosperous part of America in Mississippi. This is a time and place where thousands of families like Cassie are poor and considered the 'lower, working class'. Poverty and unemployment was wide spread in the 1930's. Therefore, black people had to work very hard because they didn't have the same rights as white people. ...read more.

Mr. Barnett serves the woman 'without a word of apology'. This suggests that he does not care if they are not served. 'as is were not even there' shows the bad manners and covetousness. Mr. Barnett still does not look at Cassie. Mr Barnett's language shows us he is r****t, rude, prejudiced and disrespectful to black people. He uses the term of abuse 'n****r' and spits in front of Stacey. Stacey and T.J want to get out of the store to avoid trouble. 'as if nothing had happened' could suggest that T.J does not realise what is going on, or suggests that he is used to it and just accepts it. He may have experienced it before. T.J's family are poorer than Cassie's. Cassie is angry at Mr. Barnett because he treated the other woman politely, addressing her name. When Cassie asks Mr. Barnett again serve her, T.J and Stacey, Mr. Barnett 'recoiled'. This is a very unpleasant reaction and his body language shows he is disgusted by Cassie touching his shirt. He refers to Cassie as 'little black self'', this is how he speaks to Cassie, in 'a low, tight voice'. This comment shows he is r****t and ignorant. He is also very angry at Cassie because as a black child, she must not try to cause any trouble. 'face red and eyes bulging' shows the bitterness of Mr. Barnett and the adjectives make him appear very nasty and unpleasant. 'Mr Barnet 'spat' over the counter which is particularly oafish and abusive. The language used to describe the way Mr. Barnett speaks shows what he is like and how r****t this society is. ...read more.

This is the main point of how Big Ma explains it to Cassie. Cassie learns from Lillian Jean, by the way she treated her. She learns how black people are meant to be treated from Lillian Jean because no one in her family has told her as she is na�ve and they may think she would not understand just yet , but Lillian Jean makes it clear to Cassie what she is. Mr. Barnett does not want anything to do with black people. The place where Cassie lives is an effective device for telling the story because it helps Cassie to grow up quickly and realise the society she lives in is really like. Because Cassie is young, it is interesting to see how she reacts to r****t situations, which she has never experienced before. r****m is a big factor in the novel, which Cassie learns to accept through a number of experiences. At the beginning of the chapter, Cassie is feeling excited and looking forward to seeing Strawberry. At the end of the chapter she is feeling angry, humiliated and betrayed by Big Ma because of what happened. Throughout the chapter, things become worse for Cassie. However, she learns from her experiences and she shows her bravery and she even teaches Lillian Jean a lesson, by getting her revenge. The novel lets the reader see through the eyes of a child and experience the innocence and disbelief in the cruelties of life brought by r****m and prejudice. It examines many issues for example, courage, bravery, prejudice, the power to succeed and the strength to survive. Black people have known that 'courage comes only to those who earn it'. Cassie does earn her courage and she shows it in a number of incidents. ...read more.