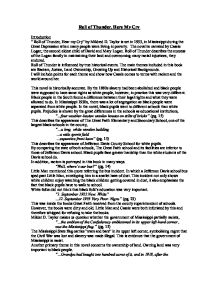 Roll of Thunder, Here My Cry Introduction " Roll of Thunder, Hear my Cry" by Mildred D. Taylor is set in 1933, in Mississippi during the Great Depression when many people were living in poverty. The novel is narrated by Cassie Logan; the second eldest child of David and Mary Logan. Roll of Thunder describes the success of the Logan family in maintaining their land and overcoming many racial injustices, they endured. Roll of Thunder is influenced by true historical events. The main themes included in this book are r****m, Justice, Land Ownership, Growing Up and Historical Backgrounds. I will include points for each theme and show how Cassie comes to terms with r****m and the world around her. This novel is historically accurate. By the 1880s slavery had been abolished and black people were supposed to have same rights as white people, however, in practice this was very different. Black people in the South found a difference between their legal rights and what they were allowed to do. ...read more.

(pg. 15) The Mississippi State flag carries "stars and bars" in its upper left corner, symbolising regret that the Civil War was lost and slavery was made illegal. This is evidence that the government of Mississippi is r****t. Another primary theme in this novel concerns the ownership of land. Owning land was very important to black people. "...Grandpa had bought two hundred acres of it, and in 1918, after the first two hundred acres had been paid off, he bought another two hundred." (pg.9) Here Cassie is talking about when her grandpa bought land. For black people to own their own land signifies possession. It means independence and freedom. Black people owning land in Mississippi is seen as provocative by most local whites. Although the Logans own their own land, many in the black community are sharecroppers. Sharecroppers are farmers who do not own the land they work on. In exchange for the use of the land, the farmers must give a certain percentage of their harvest to the owner. ...read more.

The fundamental lesson that she learns, however, is that material liberty is essential to pride and ethical freedom. Because the Logans own their land, they have opportunities that other black families do not have. We learn a great deal about Mississippi society in the 1930s through 'Roll of Thunder, Her My Cry'. Taylor has shown the true vision of black families and their racial struggles during this period, contrasting the shield of family love against the evils of r****m. She uses events that occurred in this society in her novel, for instance the Logans' boycotting of the Wallaces' store due to the lynching of the Berry family. Cassie represents the outrage of the Mississippi folks, who lived in a r****t, segregated society that gave little chances for black citizens to succeed. Her character develops to gaining an understanding of how her family can fight back against r****m and still survive. This novel made me see how the black people of Mississippi , during the 1930s, suffered from the hatred of white folks. This novel made me question the way in which society was government. Trials and tribulations of the Logan family has made me realise that when a family sticks together they can survive through the toughest of times. ...read more.