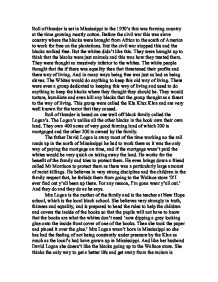 Roll of thunder is set in Mississippi in the 1930's this was farming country at the time growing mostly cotton.

Roll of thunder is set in Mississippi in the 1930's this was farming country at the time growing mostly cotton. Before the civil war this was slave country where the blacks were brought from Africa to the south of America to work for free on the plantations. But the civil war stopped this and the blacks walked free. But the whites didn't like this. They were brought up to think that the blacks were just animals and this was how they treated them. They were thought as massively inferior to the whites. The white people thought that the if there was equality then that threatened their profits and there way of living. And in many ways being free was just as bad as being slaves. The Whites would do anything to keep this old way of living. There were even a group dedicated to keeping this way of living and used to do anything to keep the blacks where they thought they should be. They would torture, humiliate and even kill any blacks that the group thought as a threat to the way of living. This group were called the Klu Klux Klan and are very well known for the terror that they caused. Roll of thunder is based on one well off black family called the Logan's. The Logan's unlike all the other blacks in the book own their own land. ...read more.

She is very comforting too, especially when Little Man was splashed by the bus '"now look here baby, it aint the end of the world."' And has a very caring side to her. Cassie is the main character and the narrator of the story and we see how black people in the book lived like through her eyes. She is very loyal to her family and sticks up for Little Man when me is told off for stamping on his book. She gives the book back to Miz Crocker. 'I turned around. "Miz Crocker" I said "I don't want my book either"' so little mad wouldn't think that he was the only one with the same feeling. Cassie is a rebellious girl and doesn't try to blend in with the crowd. She doesn't chant along with the others in the class. After the sabotage of the bus Cassie is very scared for the safety of her family if the whites found out that it was then that did it, through the we see how scared the blacks got when they had done something bad or wrong to the whites. Stacey is the oldest child of the family and is one of the most featured in the first four chapters. We learn a lot about his views on the world and his way of living. He is very honest above all else and despises cheating. ...read more.

Jeremy is a white boy in the story, but unlike the rest of the whites in the book Jeremy wants to be friend with the Logan children but they reject him. He doesn't think of himself as better that the Logan's and he never got the bus no matter what the weather was like. He takes allot of stick for trying to be friendly with the Logan's. Mr Morrison is Mr Logan's friend. They met on the railroads. Mr Morrison was sacked from his job on the rail roads and hadn't been able to get any work for months. So Mr Logan decided to hire him as a handy-man but he also hired him to help protect the family. He is a very big and strong man, the children refer to him when they first see him for the first time as big as a tree. When the 'Knight Riders come to the farm, he is standing in the field with a shotgun ready if they start any trouble. He also explains to Stacey after the fight with T.J. that he isn't going to tell mama about the fight but is going to let Stacey do it, this shows his trust in him. T.J Avery is Stacey's best friend. But is starting to lose his way. He tries to cheat on the big history test and when then he is about to get caught he passes the notes to Stacey and Stacey gets caught. He often goes up to the Wallace store and always triesto get out of hard work by not being around. ...read more.