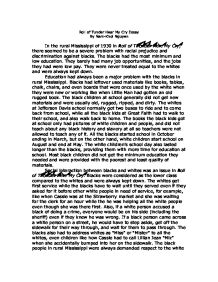 Roll of Tunder Hear My Cry

Roll of Tunder Hear My Cry Essay By Nam-Khoi Nguyen In the rural Mississippi of 1930 in Roll of Thunder Here My Cry, there seemed to be a severe problem with racial prejudice and discrimination against blacks. The blacks had the most minimum and low education. They barely had many job opportunities, and the jobs they had were low pay. They were never treated equal to the whites and were always kept down. Education had always been a major problem with the blacks in rural Mississippi. Blacks had leftover used materials like books, tables, chalk, chairs, and even boards that were once used by the white when they were new or working like when Little Man had gotten an old rugged book. ...read more.

Most black children did not get the minimum education they needed and were provided with the poorest and least quality of materials. Social interaction between blacks and whites was an issue in Roll of Thunder Here My Cry. Blacks were considered as the lower class compared to the whites and were always kept down. The whites get first service while the blacks have to wait until they served even if they asked for it before other white people in need of service, for example, like when Cassie was at the Strawberry market and she was waiting for the clerk for an hour while the he was helping all the white people even though she was there first. ...read more.

Most blacks worked as tenant farmers who did sharecropping for the whites. Most of the farmers got paid only 50 cents a day, only enough to feed his family. Other jobs that blacks had usually gave them a small pay and were generally not rich. Some worked at schools, railroads, and stores. The black children also had to help the family to get money for debts and food. A lot of the blacks in Mississippi grew cotton field to sell and make money, but did not make too much profit at the time. The blacks had the most minimum job opportunities and were always scarce. The blacks had an extremely hard life in the 1930's of rural Mississippi and were treated very poorly by the white people. The black people had a very minimum education, bad social interaction, and little job opportunities. ...read more.