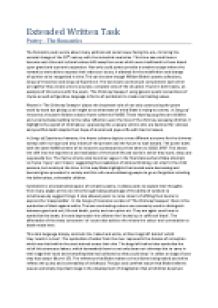 Romanticism - Blake's Songs of Innocence and Songs of Experience

﻿Extended Written Task Poetry ? The Romantics ________________ The Romantic poets wrote about many political and social issues facing the era, mirroring the societal change of the 18th century with the industrial revolution. This time saw small towns become vast cities and cultural values shift away from ones which were traditional to those based upon greed and economic expansion. Not only could poetry provide a creative escape where the romantics were able to express their values on issues, it allowed for the redefinition and change of opinion to be recognised in time. This can be seen though William Blake?s poetry collections, Songs of Innocence and Songs of Experience. The two books contrast yet complement each other as together they create a more accurate, complete view of the situation. Found in both books, an example of this occurs with the poem, ?The Chimney Sweeper? using generic poetic conventions of rhyme as well as figurative language in forms of symbolism to create contrasting values. Rhyme in ?The Chimney Sweeper? places the important role of not only constructing the poem word by word but giving us an insight as to what state of mind Blake is trying to convey. ...read more.

They are again used here to symbolise the death, dirt and depression the children feel ?locked up in coffins of black?. The alliteration of the sharp consonant ?ck? sound also adds to the misery the colour and connotation to death made here. This dark language sharply contrasts the ?naked and white, all their bags left behind? whilst they ?wash in a river?. The symbolism of water from the river represents the cleanse of corruption which was held within the soot stained across their skin. The bags left behind also symbolise the rid of this strenuous labour, which demanded them to not only clean out chimneys but to carry in their bags their tools and everything that had collected so they could sleep ?in cellars on bags of soot they had swept? (Nurmi 17). The reference that Blake makes to the children being naked and white reflects the purity and vulnerability of childhood. The joys and carefree nature that Blake believes was an extremely important stage in the development of imagination that all children deserved. In the Songs of Experience the same colours are used with the ?little black thing? against the ?snow?. ...read more.

In Songs of Experience this criticism extends to the state ?God, his priest and King?. Blake recognises the significant potential the government could make in stopping these practises of child labour yet the government, church nor society are doing anything to help these children from their inevitable deaths they face so young. Blake therefore comments on the ills of his society through using poetry to place sympathy toward the children. The two poems together are a comment on the societal morals shifting to economic greed instead of traditional values. It also reflects upon the source of power in contemporary society for example it is not the one with faith, such as the little boy, but the ones with money and often cruel intentions. I believe that these two poems would be an accurate interpretation of the world as seen by children in the 18th century. As Blake had a special ability to connect to his childhood in order to roam his imagination whilst experiencing the issue from an adult?s standpoint and seeing the realities and consequences of such practises. Therefore once reading this poem you do believe that something should be done for these children and create change for the world in which they live. ...read more.