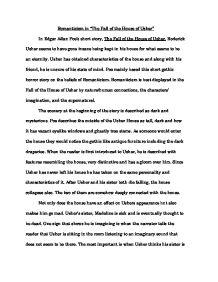 Romanticism in &quot;The Fall of the House of Usher&quot;

Romanticism in "The Fall of the House of Usher" In Edgar Allan Poe's short story, The Fall of the House of Usher, Roderick Usher seems to have gone insane being kept in his house for what seems to be an eternity. Usher has obtained characteristics of the house and along with his friend, he is unsure of his state of mind. Poe mainly based this short gothic horror story on the beliefs of Romanticism. Romanticism is best displayed in the Fall of the House of Usher by nature/human connections, the characters' imagination, and the supernatural. The scenery at the beginning of the story is described as dark and mysterious. Poe describes the outside of the Usher House as tall, dark and how it has vacant eyelike windows and ghastly tree stems. ...read more.

The two of them are somehow deeply connected with the house. Not only does the house have an effect on Ushers appearance but also makes him go mad. Usher's sister, Madeline is sick and is eventually thought to be dead. One sign that shows he is imagining is when the narrator tells the reader that Usher is sitting in the room listening to an imaginary sound that does not seem to be there. The most important is when Usher thinks his sister is dead, when she has only fainted. Poe gives the reader clues about the truth while the narrator and Usher are putting Madeline's body in the tomb. The narrator notices that Madeline still has color in her face, a flushed look even, so he suspects something but still carries on with the burial. ...read more.

Usher is panicking, him knowing that it is Madeline coming to get revenge on him for burying her alive. She enters the room gasping for breath and then strangles her brother to death before they both fall to the ground dead. How could she still be alive after a week with no food or water? How did she escape her tightly closed tomb in the basement? There is probably no chance this would happen so there fore it is supernatural. The connection between Roderick Usher and his house is unexplainable. Poe likes to let the reader fill in whatever they want to help tell or end the story. This was one of his best Romanists pieces. Human/nature connection, the imagination of characters, and the supernatural are the best elements from Romanticism that are used in The Fall of the House of Usher. ?? ?? ?? ?? ...read more.