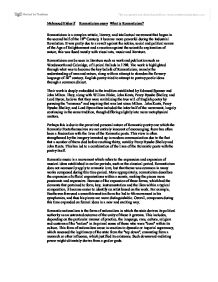 Romanticism is a complex artistic, literary, and intellectual movement that began in the second half of the 18th Century, it became more powerful during the Industrial Revolution. It was partly due to a revolt against the nobles, social and political norms of the Age of Enlightenment and a reaction against the scientific explanation of nature, this was fused mostly with visual arts, music and literature.

Romanticism can be seen in literature such as work and publication such as Wordsworth and Coleridge, of Lyrical Ballads in 1798. The work is highlighted through what was to become the key beliefs of Romanticism, namely the understanding of man and nature, along with an attempt to abandon the flowery language of 18th century. English poetry tried to attempt to portray poetic ideas through a common dialect.

Romantic music is a movement which refers to the expression and expansion of musical ideas established in earlier periods, such as the classical period. Romanticism does not necessarily apply to romantic love, but that theme was common in many works composed during this time period. More appropriately, romanticism describes the expansion of official organisations within a sonata, making the pieces more passionate and expressive. Because of the expansion of these forms, which had the elements that pertained to form, key, instrumentation and the likes within a typical composition, it became easier to identify an artist based on the work. For example, Beethoven favoured a smooth transition from the 3rd to 4th movement in his symphonies, and thus his pieces are more distinguishable. Overall, composers during this time expanded on formal ideas in a new and exciting way.

Romantic nationalism is the form of nationalism in which the state derives its political authority as an untreated outcome of the unity of those it governs. This includes, depending on the particular manner of practice, the language, race, culture, religion and customs of the "nation" in its primal sense of those who were "born" within its culture. This form of nationalism arose in reaction to dynastic or imperial supremacy, which assessed the legitimacy of the state from the "top down", emanating from a monarch or other influence, which justified its existence. Such downward-radiating power might ultimately derive from a god or gods.

Among the key themes of Romanticism, and its most enduring legacy, the cultural statements of romantic nationalism have also been central in post-Enlightenment art and political philosophy. From its earliest stirrings, with their focus on the development of national languages and folklore, and the spiritual value of local customs and traditions, to the movements that would redraw the map of Europe and lead to calls for "self-determination" of nationalities, nationalism was one of the key issues in Romanticism, determining its roles, expressions and meanings.

The movement focused on imagination, emotion, and freedom by way of prejudice and uniqueness. Artists believed in naturalness, freedom from boundaries and rules, and living a solitary life free from communal boundaries. Romantic artists believed that imagination was superior to reason and beauty. They loved and worshipped nature and were dedicated to examining human personality and moods. Romantics were inherently curious, investigating folk cultures, ethnic origins, the medieval era. They admired the genius and the hero, focusing on one’s passion and their inner problems. Romantics also were interested in anything mysterious, mystifying, isolated, occult, and satanic. As a movement that began as an artistic and intellectual movement that rejected the traditional values of social structure and religion, it encouraged individualism, emotions, and nature.