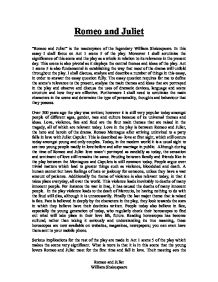 Romeo and Juliet "Romeo and Juliet" is the masterpiece of the legendary William Shakespeare. In this essay I shall focus on Act 1 scene 5 of the play. Moreover I shall scrutinize the significance of this scene and the play as a whole in relation to its relevance in the present day. This scene is also pivotal as it displays the central themes and ideas of the play. Act 1 scene 5 is also fundamental in establishing the way that most of the drama will unfold throughout the play. I shall discuss, analyze and describe a number of things in this essay, in order to answer the essay question fully. The essay question requires for me to define the scene's relevance to the present, analyse the main themes and ideas that are portrayed in the play and observe and discuss the uses of dramatic devices, language and scene structure and how they are effective. Furthermore I shall need to scrutinise the main characters in the scene and determine the type of personality, thoughts and behaviour that they possess. Over 300 years ago the play was written; however it is still very popular today amongst people of different ages, gender, race and culture because of its universal themes and ideas. Love, violence, fate and feud are the four main themes that are raised in the tragedy, all of which are relevant today. Love in the play is between Romeo and Juliet, the hero and heroin of the drama. Romeo Montague after arriving uninvited to a party falls in love with Juliet Capulet. This is described as- love at first sight, which still occurs today amongst young and only couples. Today, in the modern world it is a usual sight to see two young people madly in love before and after marriage in public. Although during the time of Romeo and Juliet love wasn't portrayed as candidly as today, the sensation and sentiment of love still remains the same. ...read more.

When Romeo enters the Capulet household disguised in a mask, it builds tension in the audience because they anticipate his capture. They know the mask will fail its purpose and it does because Tybalt recognises him by his "voice", which he fails to disguise. Tybalt refers to Romeo as having an "antic face", not meaning his mask, but about his actual face. Tybalt believes Romeo has only come to the party to mock and "scorn" at their "solemnity". By saying Romeo has an "antic face" he means that Romeo's face is full of mockery and "spite". Tybalt recognising Romeo by his voice is unexpected and the audience predict a brawl of some sort to take place. They are even more stunned when his uncle, Lord Capulet, refuses to cause Romeo "disparagement", and instead tells Tybalt off. The audience relish the moment of Tybalt's telling off, however they know that Tybalt is not a man who will forget an incident as this, so when Tybalt swears to get revenge they anticipate for a fight to take place between him and Romeo. The dramatic device that is used at the end of the scene when Romeo and Juliet find out each other's identities, is that Shakespeare leaves it to the last minute (after they meet and can do nothing to change their situation) to tell them the truth about each other. He does this to play with the audience's emotions; he takes the audience to a high and then lets them plummet. The young lovers' meeting makes the audience forget that they happen to come from rival households, and it strikes them unexpectedly when Romeo and Juliet find out each other's identities. It grieves the audience to gain knowledge of the consequences that Romeo and Juliet will have go through for their love. Shakespeare did this because this makes the couple helpless to their love; they cannot change their emotions and cannot but love each other for who they are. ...read more.

It is just in his nature to cause trouble. This scene is tranquil, apart from the times that Tybalt speaks raising the themes of violence and feud, when he calls Romeo a "slave" with an "antic face"; this conveys Tybalt's paranoia, which leads to his early death. His heart is set on thinking that Montagues are only alive to mock and "scorn" him and his family. He has an arrogant personality. This is known when he says, "To strike him I hold it not a sin", he believes whatever he does is right and is not a "sin". His arrogance, paranoia and lust for violence are what lead him to his early death. Romeo and Juliet is a remarkable piece of writing by William Shakespeare. The techniques he uses in order to maintain the tension and excitement is incredible like the way that he makes the audience forget all the bloodshed, hatred and problems, then brings the topic back up when the audience least expect it, startling them but drawing their attention closer to the troubles and plights lying ahead. It is a tragedy loved by all people, even knowing the ending; people still have hope in their hearts while watching that Romeo and Juliet's love will survive. The use of imagery in Romeo's soliloquy is absolutely astounding, the rhythm and rhyme all fit in together to create the perfectly romantic speech. The romance, violence, feud and fate all piece together to generate a play of excitement, tension and apprehension. It's a play suitable for genders, violence and feud to suit males and love and fate to suit females. This makes people realise how strong love can be and how lucky they are if they have it, it gives people the chance to appreciate love for what it is. The themes that are mentioned in the play will always be relevant to people no matter what century they are in because they are universal, and therefore the audience will be able to relate to the play. ?? ?? ?? ?? Romeo and Juliet William Shakespeare ...read more.