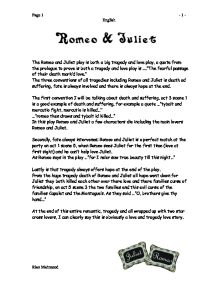 The Romeo and Juliet play is both a big tragedy and love play, a quote from the prologue to prove is both a tragedy and love play is ....''The fearful passage of their death mark'd love.'' The three conventions of all tragedies including Romeo and Juliet is death ad suffering, fate is always involved and there is always hope at the end. The first convention I will be talking about death and suffering, act 3 scene 1 is a good example of death and suffering, for example a quote ...''tybalt and mercutio fight, mercutio is killed...'' ...''romeo then draws and tybalt id killed...'' In this play Romeo and Juliet a few characters die including the main lovers Romeo and Juliet. Secondly, fate always intervenes; Romeo and Juliet is a perfect match at the party on act 1 scene 5, when Romeo sees Juliet for the first time (love at first sight) and he can't help love Juliet. As Romeo says in the play ...''for I ne'er saw true beauty till this night...'' Lastly is that tragedy always offers hope at the end of the play. ...read more.

In Romeo and Juliet we see an organized marriage between Juliet and Paris. Which is lead by Lord Capulet, Juliet's farther. But Juliet starts having an argument with her father because she loved and wanted to marry Romeo. This is very serious at the time of the Elizabethans, her father would be severely angry her parents would be disowned by her. The second convention of the Elizabethans believed in hospitality. Hospitality means that they thought that social status was very important. They would hold enormous, fantastic parties with loads of food, music and guests from all over the city or town. The parties were often fancy dress or masked b***s were guest would hide there identity by wearing ''Visors''. They could get into parties they weren't invited too. The party which was held in Romeo and Juliet in act 1 scene 5 was held by Lord Capulet, the party was held so that Juliet could be introduced to her new relationship partner which was meant to be Paris. It was believed that fate was a very enormous force at the time of the Elizabethans. Fate happened in the play by someone said to Romeo and Juliet, the quote is '...a pair of star crossed lovers''. ...read more.

Romeo: ...''saints do not move though grant for prayers sake.'' Juliet: ...'' Then move not, while my prayers effect I take The religious words used in there sonnet, we both used by Romeo and Juliet the exacted same religious words. This shows that they are made for each other. The words are as an example, Holy, Pilgrims, Saint, Faith, Sin, and Prayer. The fact that Romeo and Juliet share a sonnet suggests that they are mentally and spiritually bonded and born to love each other. In the play Romeo and Juliet, in a certain scene of the play of Act 1 Scene 5 is a dramatic and exiting play to watch. The reason is that Shakespeare has used love and hate in the scene when at one part they love each other and than suddenly it changes back to hate gain. Another reason is that he used a dramatic part which leads to some character being killed and hurt, like Tybalt and Mercutio were killed. The last reason is that Shakespeare has added the terms of Marriage, Religion, Fate and hospitality. Why did he add these things into his play? He added them because the time when he was around all these things were very important, but know time has moved on. ?? ?? ?? ?? Page 1 - 1 - English Riaz Mahmood ...read more.