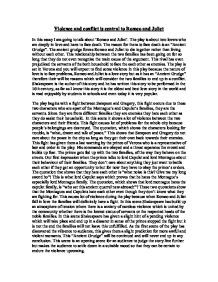 Violence and conflict is central to Romeo and Juliet In this essay I am going to talk about 'Romeo and Juliet'. The play is about two lovers who are deeply in love and have to face death. The reason for them to face death is an "Ancient Grudge". The ancient grudge forces Romeo and Juliet to die together rather than living without each other. This relationship between the two families has been going on for so long that they do not even recognize the main cause of the argument. This rival has even prejudiced the servants of the both household to face the each other as enemies. The play is set in Verona and you will expect to find some violence in this play because the nature of love is to face problems, Romeo and Juliet is a love story but as it has an "Ancient Grudge" therefore their will be reasons which will consider the two families to end up in a conflict. Shakespeare is the author of this story and he has written this story to be performed in the 16th century, as far as I know this story it is the oldest and best love story in the world and is read enjoyably by students in schools and even today it is very popular. The play begins with a fight between Sampson and Gregory, this fight occurs due to these two characters who are apart of the Montague's and Capulet's families, they are the servants. ...read more.

Therefore this scene does not consist us to accuse the fault of Romeo committed the murder as wrong as circumstances forced Romeo to take a hasty step. If Mercutio was patient towards his anger then matters would have been resolved and better. Romeo shouldn't have killed Tybalt because it was Mercutio's fault starting everything and he died at the end but Romeo should have also stayed patient and take the matter legally rather then continuing the "Ancient Grudge". Romeo has made things worse between him and Juliet, due to the violent incident the families will build up their revenge and will not let the name of "Romeo and Juliet" to unite. In Act 3 scene 5 lady Capulet's plan for dealing with Romeo is to punish him for killing Tybalt so that he is not seen again. Juliet seems to support her mother's idea because she does not want her mother to know about her marriage with Romeo. Juliet's mother lady Capulet is a person who does not care about others she's just for herself, 'Selfish'. Lady Capulet wants Juliet to get married to Paris. The quotation which shows Juliet refusing to get married to Paris is "I will marry yet, and when I do, I swear it shall be Romeo." This shows that Juliet still loves Romeo; her love has not decreased for him when she finds out about Romeo killing Tybalt. Lord Capulet reacts very horribly to his daughter when she refuses to get married to Paris. ...read more.

Juliet's mother's angry nature adds to the feud, her father's stupidity prevents the feud from stopping. Romeos mother is to soft and caring to notice how bad the violence is, her husband wants to get involved but is not allowed. The Prince is not reliable and does not keep promises, the Friar makes foolish decisions. This leaves us with the 'two star crossed lovers' Romeo is to late when he reacts to the violence and Juliet's naivety and stubbornness creates further tension and violence. The reactions from all of the characters involved leads to the big dramatic ending were the to leading characters die arm in arm. It takes this for the fathers to realise what all of this violence and conflict has caused and they both decide to make up. It is still too late as they have both just lost their two adorable children, for the two families to unite has remained the peace at Verona, The violence and conflict was due to Lord Capulet and Lord Montague stubborness of hating eachother and trying to build up tensions and incidents that effects the opposite enemy. The audience are now left with their final decisions and judgments of the play. Shakespeare wanted them to leave thinking about their own individual life and how they live in their own society, so that to stop keeping grudges against each other that causes violence and conflict and ends up in a disastrous and sympathetic ending as the two deeply in love, lovers, 'Romeo and Juliet'. ...read more.