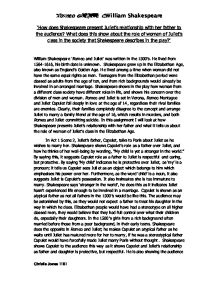 'How does Shakespeare present Juliet's relationship with her father to the audience? What does this show about the role of woman of Juliet's class in the society that Shakespeare describes in the play?' William Shakespeare 'Romeo and Juliet' was written in the 1500's. He lived from 1564-1616, his birth date is unknown. Shakespeare grew up in the Elizabethan Age, also known as England's Golden Age. He lived among a time when woman did not have the same equal rights as men. Teenagers from the Elizabethan period were classed as adults from the age of ten, and from rich backgrounds would already be involved in an arranged marriage. Shakespeare shows in the play how woman from a different class society have different roles in life, and shows his concern over the division of men and woman. Romeo and Juliet is set in Verona, Romeo Montague and Juliet Capulet fall deeply in love at the age of 14, regardless their rival families are enemies. Clearly, their families completely disagree to the concept and arrange Juliet to marry a family friend at the age of 16, which results in murders, and both Romeo and Juliet committing suicide. In this assignment I will look at how Shakespeare presents Juliet's relationship with her father and what it tells us about the role of woman of Juliet's class in the Elizabethan Age. ...read more.

This makes Capulet seem dominant over Juliet and therefore suggesting he is more of a stereotypical father from the 1500's. By using the adjective 'desperate', Capulet is indicating Juliet is in critical need for love, as it means 'hopeless' and therefore Capulet thinks he's being considerate by arranging a marriage for her. This clearly shows Capulet's views on the arranged marriage have changed, and that he is going to make sure Juliet does marry Paris. Although he is still respectful towards Juliet, his actions are dominant over what Juliet does. It shows a turn in Capulet and Juliet's relationship. The audience could start to relate to this behaviour as Capulet is beginning to turn into a more stereotypical father from the sixteenth century. It also shows Shakespeare's concerns over society as he shows that men's thoughts and opinions mattered more than a woman's, and that they have a much stronger and important role in life as they can make decisions for woman. Furthermore, Capulet also says, "I think she will be ruled in all respects by me". This emphasises my point that Capulet is being more dominant over Juliet. It indicates that she will be told what to do by him and nobody else. By saying 'ruled' Capulet is insisting she will do as she is told, just like every other stereotypical woman from the 1500's. ...read more.

Capulet has become the perfect stereotype for men in the 1500's. In my opinion, Capulet and Juliet's relationship alters because of Tybalt's death. Capulet realises how precious his family are to him and therefore has to take a stronger role towards Juliet and his family to make sure they do not get hurt again. It shows he still cares and respects Juliet, but he only wants the best for her so he tries to make her happy by making her marry Paris. Capulet is to blame over their aggressive and dominant relationship as his plan backfires as he doesn't see what effect it is having on Juliet, which forces her to stray. An Elizabethan audience could relate very well to this play, as all men were like this in the 1500's, they would have control over their daughter's status and what they become of it. Although, in modern times, a modern audience would not tolerate this sort of behaviour, woman of our time have complete control over what they do with their life and no man could change that. Therefore, Shakespeare is proving how the division between men and woman and classes in society is wrong and showing the effects it could lead to. He has shown throughout the play his concern over how this was in the sixteenth century. ?? ?? ?? ?? Romeo and Juliet William Shakespeare Christie Jones 11B1 ...read more.