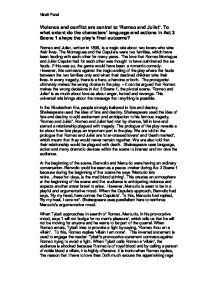 Violence and conflict are central to 'Romeo and Juliet'. To what extent do the characters' language and actions in Act 3 Scene 1 shape the play's final outcome? Romeo and Juliet, written in 1598, is a tragic tale about two lovers who take their lives. The Montagues and the Capulets were two families, which have been feuding with each other for many years. The love that Romeo Montague and Juliet Capulet had for each other was thought to have culminated these feuds. If this was so, the genre would have been a romantic comedy. However, this contrasts against the tragic ending of the play where the feuds between the two families only end when their destined children take their lives. In every tragedy, there is a hero, a heroine or both. The protagonist ultimately makes the wrong choice in the play - it can be argued that Romeo makes the wrong decisions in Act 3 Scene 1, the pivotal scene. 'Romeo and Juliet' is as much about love as about anger, hatred and revenge. This universal tale brings about the message that anything is possible. In the Elizabethan Era, people strongly believed in fate and destiny. Shakespeare used the idea of fate and destiny. Shakespeare used the idea of fate and destiny to add excitement and anticipation to his famous tragedy, 'Romeo and Juliet'. ...read more.

Tybalt witnesses Romeo and Juliet kissing at the ball and starts to feel extremely revengeful towards Romeo. This soon led to another street brawl taking place, where Mercutio and Tybalt both die. Also, the Capulet boys and the Montague boys had previously had a public street brawl at a petrol station, which left the public trembling of fear. Due to this public brawl, the families were warned by the Prince and ordered to not have anymore street brawls or else there would be severe consequences. However, ignoring the Prince's warning, another street brawl takes place and leads to the banishment of Romeo. In contrast to Mercutio's and Tybalt's provocative mood, Romeo and Benvolio try to avoid another street brawl. When Tybalt tells Romeo to 'turn and draw' his sword, Romeo refuses and says, 'I do protest I never injured thee But love thee better than thou canst devise...good Capulet, which name I tender As dearly as mine own, be satisfied'. Mercutio can't believe Romeo is not taking action against Tybalt and so spits out, 'O calm, dishonourable, vile submission' - Mercutio, again, tries to provoke a fight. Both, Romeo and Benvolio, are members of the Montague family and are trying to avoid another street brawl from happening. ...read more.

Although Romeo was trying his best to avoid a fight, Mercutio's death compelled him to avenge Tybalt. After Tybalt's death, Romeo says, 'O, I am fortune's fool', which is when Romeo realizes that fortune and fame doesn't matter in life and so gives in to his plagued destiny. The audience begins to pity Romeo. Romeo suddenly realizes that he has killed his cousin and exits the stage due to fear of the consequences. When the Capulets arrive at the crime scene, Lady Capulet, full of tears, says 'for blood of ours, shed blood of Montague'. Since Tybalt Capulet died of a fatal death, a Montague should also die. To this, the Prince says 'immediately we do exile him hence'. The Prince decides to banish Romeo, once he is found, from Verona. This shocks the audience because if Romeo is banished, the love story between the two lovers, Romeo and Juliet, will end. The audience also notices that the two rivaling families are now falling apart due to the loss of loved ones. Overall, this scene has a great impact upon the audience because there are many shocking things that the characters in the play say. There are many informal words and insults said to one another, which shock the audience since Mercutio, Tybalt and Romeo are all of noble blood and should be respected. ...read more.