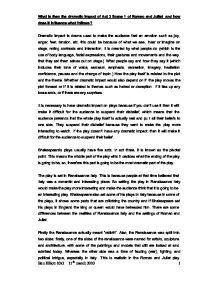 What is then the dramatic impact of Act 3 Scene 1 of Romeo and Juliet and how does it influence what follows? Dramatic impact is drama used to make the audience feel an emotion such as joy, anger, fear, tension, etc. this could be because of what we see, hear or imagine on stage, noting contrasts and interaction. It is created by what people do (which is the use of body language, facial expressions, their gestures and movements and the way that they set them selves out on stage.) What people say and how they say it (which includes their tone of voice, sarcasm, emphasis, recreation, imagery, hesitation confidence, pauses and the change of topic.) How the play itself is related to the plot and the theme. Whether dramatic impact would also depend on if the play moves the plot forward or if it is related to themes such as hatred or deception. If it ties up any loose ends, or if there are any surprises. It is necessary to have dramatic impact on plays because if you don't use it then it will make it difficult for the audience to suspend their disbelief, which means that the audience pretends that the whole play itself is actually real and put all their beliefs to one side. They suspend their disbelief because they want to make the play more interesting to watch. If the play doesn't have any dramatic impact, then it will make it difficult for the audience to suspend their belief. Shakespeare's plays usually have five acts. In act three, it is known as the pivotal point. This means the middle part of the play which decides what the ending of the play is going to be, so, therefore this part is going to be the most dramatic part of the play. The play is set in Renaissance Italy. This is because people at that time believed that Italy was a romantic and interesting place. ...read more.

He changes back when Mercutio offers him to a duel, so then we would feel like we want them to stop because we know someone is going to get hurt. Now I'd like to focus on Mercutio. Mercutio is a relative of Prince Escalus and a friend of Romeo, so he is a friend to the Montague family. In Act 1 Scene 4, we see the first entry of Mercutio. At this point we know that he is a good friend to Romeo. I know this from when he goes on about that fantastical story about a fairy called Queen Mab, who interferes with peoples dreams, he makes up random rubbish that when she touches peoples lips they dream of kissing ("O'er ladies lips, who straight kisses dream") and when Romeo stops him and says " peace, peace Mercutio peace! Thou talkst of nothing". So he basically says "Oh shut up Mercutio you are talking rubbish!" Then Mercutio simply says "yes, I'm talking rubbish, I'm talking of dreams, and so are you!" This shows that Mercutio is a good friend and tells Romeo to forget about dreams. Also, Mercutio is very witty (funny) and incredibly quick witted (never lost for words). We are told this by Romeo when he is talking to the nurse in Act 2 Scene 3 and says "a gentleman nurse, that loves to hear himself talk". This shows that he is entertaining, if one of his close friends says he's entertaining, and then I'm sure that proves my point that he is a very funny man who can sometimes go far. When he says to the nurse "No hare, sir, unless a hare, sir, in a Lenten pie-that is, something stale and hoar ere it be spent." This shows that he was only joking around with the nurse but that line shows that he was going too far and he didn't know when to stop. ...read more.

As I've already mentioned, Lord Capulet is a very good father, by the standards of time. He gives her a choice in marrying. But when Juliet changes, he changes and transforms into the kind of fathers of that time. This makes Juliet alone, which is why the audience will feel sorry for her. Lady Capulet doesn't defend her. Especially when she says "do as thou wilt I am done with thee". This shows that Juliet is alone, so she goes to the Friar desperately for help. The relationship between Juliet and her parents are broken as I've explained. So again, the impact on the audience will be frustration since we want to help Juliet but we can't because we can't do anything. I feel that for Romeo and Juliet, I thought that the language was hard to understand. But however it was explained briefly by my teacher. Before I did this topic, I didn't really enjoy doing Shakespeare. In fact, when I found out I was doing an essay on this I dreaded it! But I forced myself to do it and now I feel much more confident with Shakespeare. And it will motivate me to do better in all my other English exams and coursework. There are some similarities that I learnt from then and now. Firstly one of the themes of this play was love of people from all ages, young and old. And this still happens today. Secondly the theme of hatred. There was lots of hatred in this play, between the Montagues and the Capulets (even though they make peace at the end). And this still happens today with people having gang wars etc. I think that it was unrealistic when Romeo killed Tybalt. I think this because Romeo is a normal 16/17 year old who has never been seen to fight. Whereas Tybalt is an excellent fighter with years of experience. What I thought would have happened was that Tybalt would have killed Romeo, so it amazed me when Romeo killed Tybalt. ?? ?? ?? ?? 1 Ben Elliott 10x1 11th march 2010 ...read more.