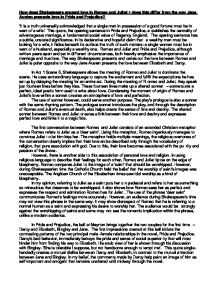 How does Shakespeare present love in Romeo and Juliet + does this differ from the way Jane Austen presents love in Pride and Prejudice? 'It is a truth universally acknowledged that a single man in possession of a good fortune must be in want of a wife.' This quote, the opening sentence in Pride and Prejudice, establishes the centrality of advantageous marriage, a fundamental social value of Regency England. The opening sentence has a subtle, unstated significance. In its declarative and hopeful claim that a wealthy man must be looking for a wife, it hides beneath its surface the truth of such matters: a single woman must be in want of a husband, especially a wealthy one. Romeo and Juliet and Pride and Prejudice, although written years apart and set in different circumstances, both heavily emphasize the importance of marriage and true love. The way Shakespeare presents and caries out the love between Romeo and Juliet is polar opposite to the way Jane Austen presents the love between Elizabeth and Darcy. In Act 1 Scene 5, Shakespeare allows the meeting of Romeo and Juliet to dominate the scene. He uses extraordinary language to capture the excitement and fulfill the expectations he has set up by delaying the meeting for an entire act. During the meeting of Romeo and Juliet, they speak just fourteen lines before they kiss. ...read more.

Romeo expresses his emotions and admiration for Juliet through the use of strong metaphors seamed together in a perfect rhyming pattern of ababababab for 10 lines. The way Romeo communicates his love for Juliet makes the female audience venerate his passion for love, although this is the second time Romeo has such strong feelings towards a woman since the beginning of the play. This instantly plants the thought that Romeo may love being in love rather than being in love with Juliet. In my opinion, as the scene goes on Romeo justifies that his love for Juliet is genuine since he endures the love he has for her even after he realizes that she is a Capulet. Throughout Act 1, Scene 5 Romeo persistently compliments Juliet's beauty. "Like a rich jewel in an Ethiope's ear' is one of the numerous binary opposites Shakespeare uses to describe Juliet. Shakespeare uses the world 'jewel' to show that Juliet is precious and is valuable to Romeo, just like a rich jewel would be. The simile helps illuminate Juliet's beauty because an Ethiope is a man or woman from Ethiopia that are very dark-skinned. Thus, the rich jewel will appear all the more brighter against a dark background. Juliet is being compared to a shining jewel and a star in the sky, which also appears bright alongside a dark background of the night sky. ...read more.

Jane Austen shows that love at first sight is not necessary and that realistic, genuine and true love is a slow burning affection that builds up over time. It also shows that love is formed in different ways and may even be initiated with strong dislike. After many re-readings of Romeo and Juliet and Pride and Prejudice it has become clearer to me that both are riveting and extraordinary love stories that will be read for generations to come. Although my judgment of Romeo and Juliet has constantly changed, I realize now that although the love they share may be short and 'death-marked' but nonetheless it is just as extraordinary and beautiful as Elizabeth and Darcy's. Shakespeare understood the importance of keeping the audience captivated throughout the play, and therefore may have had to portray a quicken version of love to sustain the concentration and complete the love story within 'the two hours traffic' of the stage. From examining these two texts, I feel that I am now closer to understand that love comes in different forms and ways and that no boundaries can stand in the way of true love. These texts have also shown me that even in two contrasting situations that 'the course of true love never did run smooth.' The obstacles that both these couples had to overcome helped strengthen their love, this shows me that true love can hurdle over anything and when we come across our true love we should definitely go to all extremes to fight for it. ...read more.