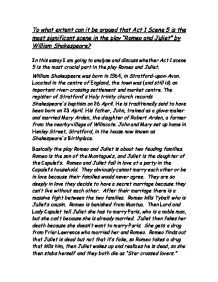 To what extent can it be argued that Act 1 Scene 5 is the most significant scene in the play "Romeo and Juliet" by William Shakespeare? In this essay I am going to analyse and discuss whether Act 1 scene 5 is the most crucial part in the play Romeo and Juliet. William Shakespeare was born in 1564, in Stratford-upon-Avon. Located in the centre of England, the town was (and still is) an important river-crossing settlement and market centre. The register of Stratford's Holy trinity church records Shakespeare's baptism on 26 April. He is traditionally said to have been born on 23 April. His father, John, trained as a glove-maker and married Mary Arden, the daughter of Robert Arden, a farmer from the nearby village of Wilmcote. John and Mary set up home in Henley Street, Stratford, in the house now known as Shakespeare's Birthplace. Basically the play Romeo and Juliet is about two feuding families. Romeo is the son of the Montague's, and Juliet is the daughter of the Capulet's. Romeo and Juliet fall in love at a party in the Capulet's household. They obviously cannot marry each other or be in love because their families would never agree. They are so deeply in love they decide to have a secret marriage because they can't live without each other. After their marriage there is a massive fight between the two families. Romeo kills Tybalt who is Juliet's cousin. Romeo is banished from Mantua. Then Lord and Lady Capulet tell Juliet she has to marry Paris, who is a noble man, but she can't because she is already married. Juliet then fakes her death because she doesn't want to marry Paris. She gets a drug from Friar Lawrence who married her and Romeo. Romeo finds out that Juliet is dead but not that it's fake, so Romeo takes a drug that kills him, then Juliet wakes up and realizes he is dead, so she then stabs herself and they both die as "Star crossed lovers." ...read more.

Romeo's devotion to Rosaline is so desperate he tells Benvoilio he wants to go to the ball so he can try and talk to Rosaline. He tells Benvolio they should take Mercutio with them as well who is kinsman to the prince and also a friend to Romeo. "Mercutio and his brother valentine." So they all decide to go, Romeo reckons this will be his best opportunity to get to know Rosaline and doesn't want to miss out on it. They will be wearing masks at the party so nobody will no that they are Montague's. everything should go to plan. "I'll go along, no such sight to be shown, but to rejoice in splendour of mine own." Act 1 sc 3- Shakespeare takes this scene to go on to tell the audience how the key character Juliet reacts to finding out that Paris wants to marry her. Lady Capulet talks to her about the proposal. She also is far more keen on her daughter getting married than her husband is, as she was married at Juliet's age. "I was your mother much upon these years." Juliet's nurse goes on to tell us about how she knows Juliet is nearly fourteen years of age. The nurse gives a longwinded explanation. "Even or odd, of all days in the year, comes lammas Eve at night shall she be fourteen. Susan and she- God rest all Christian's souls- were of an age. Well Susan is with god, she was to good for me." The nurse is talking about her daughter Susan who died. She had looked after Juliet since she was born and she also looked after her daughter Susan at that point too. The nurse treats Juliet like her daughter and her best friend. Juliet is very close to her nurse and would trust her with her life. Lady Capulet is rather impatient with the nurse because she wishes to impress upon her daughter that Paris's offer is a very attractive one. ...read more.

"Anon Anon, come, lets away, the strangers all are gone." The audience's reaction here is why hasn't Juliet told the nurse the truth if she can trust her. In this play Romeo and Juliet there are consequences in it. For example the nurse found out about Juliet and Romeo, but kept this a secret from Juliet's parents, but then betrays her by telling them, is that protection in the end? Also Juliet told her father in Act 1 Scene 3 that she will obey her father about Paris and do whatever they tell her to do. Juliet then disobeys her father by kissing Romeo. That's quite extreme. Tybalt told Romeo to get out of the Capulet's party in Act 1 Scene 5, he was really angry and said he would come back to hurt him. "I will withdraw, but this intrusion shall, now seeming sweet, convert to bitterest gall." But then later on in the play, Romeo kills Tybalt, so it was the other way round, Romeo killed Tybalt instead of Tybalt killing Romeo, Shakespeare has probably done this because Romeo couldn't die in the middle of the play because he's our hero. Then at the end of the play where Romeo and Juliet both die, it is a coincident that Juliet takes a drug to make her go to sleep, then Romeo finds her and thinks she is dead so he then take a drug which kills him, but as soon as that happens Juliet wakes up and sees Romeo dying, so she stabs herself so they both die as "Star crossed lovers," this is very dramatic. Shakespeare has made this play very extreme and quite unreal, but that was obviously his plan. Throughout my research I have realised while Act 1 Scene 5 is so significant you also have to take into account that Shakespeare has taken you through all of Act 1, however I would agree that he very cleverly gives you clues to understand why Act 1 Scene 5 is so important. ...read more.