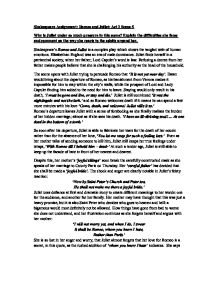 Romeo and Juliet; Act 3 Scene 5 Why is Juliet under so much pressure in this scene? Explain the difficulties she faces and comment on the way she reacts to the adults around her.

Shakespeare Assignment: Romeo and Juliet; Act 3 Scene 5 Why is Juliet under so much pressure in this scene? Explain the difficulties she faces and comment on the way she reacts to the adults around her. Shakespeare's Romeo and Juliet is a complex play which shows the tangled web of human emotions. Elizabethan England was an era of male dominance. Juliet finds herself in a patriarchal society, when her father; Lord Capulet's word is law. Refusing a decree from her father makes people believe that she is challenging his authority as the head of the household. The scene opens with Juliet trying to persuade Romeo that 'It is not yet near day'. Dawn would bring about the departure of Romeo, as his banishment from Verona makes it impossible for him to stay within the city's walls, while the prospect of Lord and Lady Capulet finding him added to the need for him to leave. Staying would only result in his death, 'I must be gone and live, or stay and die.' Juliet is still convinced 'it was the nightingale and not the lark.' and so Romeo welcomes death if it means he can spend a few more minutes with his love 'Come, death, and welcome! ...read more.

is extremely important to him, especially as his other children have dies and so the decision of her marriage cannot be taken lightly. He also goes on to explain how important Juliet's feelings are to any decision he may make. 'My will to her consent is but a part' Lord Capulet is expressing that Juliet must be happy in a match before he makes it - but later in the play we see a flip in his feelings towards the subject. Misinterpreting her tears for Romeo as grief for Tybalt, Lord Capulet decides to accept Paris's proposal for Juliet to cheer his daughter up. He feels that some good news will shake her out of the hollow of grief she has created, but he has no idea how horrified his daughter is at the thought of this marriage. In this Scene, Lord Capulet begins by offering fatherly comfort to Juliet but by the end of the scene, he is speaking in third person 'she' 'her'. This would have an even greater impact on Juliet as it would make her feel like an outsider already. When Lord Capulet see's her defiance, his attitude completely changes to that of violence and anger. ...read more.

The one person who could normally be counted on for comfort and support had just horrified Juliet with her response. We can see a gap begin to form between their relationship as Juliet reels in shock. By the end of the scene, Juliet is completely isolated as her one confidant turns there back on her. Even after this blow, Juliet is able to compose herself and convince the Nurse that she has gone to confessions, when she actually goes to seek the Friar's help. She is sarcastic as makes the Nurse feel she is praising her for the comfort. 'Well thou hast comforted me marvellous much.' Juliet is now completely on her own, with the pressures each adult around her places upon the young girl. She is learning the harsh reality of growing up, that adults can let you down. Society doesn't have the answer for Juliet as she has to hide secret after secret. The entire act is like a cauldron of emotions. The modern audience would perhaps empathise with Juliet because she is in love but her parents have forbidden her from seeing them. We sympathise with her as Lord Capulet won't let her follow her heart and will 'drag thee on a hurdle thither' if she refuses to go to the church. Jaspreet Sagoo: BGr ?? ?? ?? ?? ...read more.