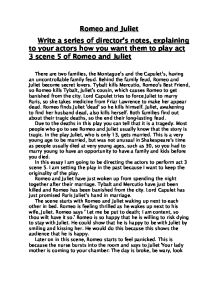 Romeo and Juliet Write a series of director's notes, explaining to your actors how you want them to play act 3 scene 5 of Romeo and Juliet There are two families, the Montague's and the Capulet's, having an uncontrollable family feud. Behind the family feud, Romeo and Juliet become secret lovers. Tybalt kills Mercutio, Romeo's Best Friend, so Romeo kills Tybalt, Juliet's cousin, which causes Romeo to get banished from the city. Lord Capulet tries to force Juliet to marry Paris, so she takes medicine from Friar Lawrence to make her appear dead. Romeo finds Juliet 'dead' so he kills himself. Juliet, awakening to find her husband dead, also kills herself. Both families find out about their tragic deaths, so the end their long-lasting feud. Due to the deaths in this play you can tell that it is a tragedy. Most people who go to see Romeo and Juliet usually know that the story is tragic. In the play Juliet, who is only 13, gets married. This is a very young age to be married, but was not unusual in Shakespeare's time as people usually died at very young ages, such as 30, so you had to marry young to have an opportunity to have a family and kids before you died. In this essay I am going to be directing the actors to perform act 3 scene 5. I am setting the play in the past because I want to keep the originality of the play. ...read more.

'Hang thee young baggage! Disobedient wretch! ' Capulet insults her because she is disobedient and refuses to talk to her if she does not marry Paris. Juliet could show her fear of her father by crying, backing away from her father, trying to hide behind her nurse and covering her face while wiping away her tears. This will show the audience that she is afraid of her father and part of the audience may feel sorry for Juliet as she cries, but others in the audience ma not show her any sympathy as her father is right in his top position of the house and arranged marriages were common in Elizabethan times. Juliet then feels hurt, shocked and hopeless as she is left alone in the room with the nurse. Her father has just threatened to disown her, and her mother has done the same. Then when Juliet asks the nurse for help, the nurse tells her 'I think its best you marry with the county.' She also says 'Romeo's a dishclout to him.' The nurse, who used to praise Romeo, has a change of heart and follows on with what her parents want. Juliet is feeling hopeless because he nurse, who knew all of Juliet's secrets, was siding with her parents. She feels shocked and hurt as the nurse tells her that she should marry Paris, even though she knows Juliet is already married to Romeo, so the marriage would be bigamous, which was considers a great sin in Elizabethan times. ...read more.

She feels this way because she thinks Juliet is still weeping over her cousin, Tybalt's, death and feels she is crying too much. 'Evermore weeping over your cousin's death? Wilt thou wash him from his grave with tears?' Lady Capulet is telling Juliet no matter how much you cry for your cousin's death, it's not going to bring him back to life. Lady Capulet can show the audience she is fed up by speaking in a harsh tone of voice and rolling her eyes while she says 'Evermore weeping over your cousin's death?' This may make the audience feel sorry for Juliet as they know she has to deal with two losses, Tybalt's death and Romeo leaving the city. In this scene Lady Capulet also feels angry and spiteful towards Romeo. This is because Lady Capulet and Juliet are discussing revenge on Romeo for killing Tybalt. 'Shall give him such an unaccustom'd dram, that he shall soon keep Tybalt company.' Lady Capulet wants to give Romeo a poison to kill him. She can show the audience that she is angry by putting on an angry face while she was talking and looking up as if to imagine Romeo's death. Lady Capulet tells Juliet that she has to marry Paris. Once Juliet refuses, Lady Capulet begins to be cruel towards Juliet. 'I would the fool were married to her grave.' Juliet's mother says this to Capulet after telling him that Juliet refuses to marry Paris. In Elizabethan times, curses from parents were considered ominous. Lady Capulet could show the audience she's being cruel by talking in a hurtful tone and giving an evil look to Juliet as she says it. ...read more.