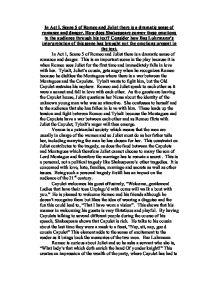 Romeo and Juliet: dramatic sense of romance and danger

Also, she has not been seen outside the mansion, hence she is not recognised as the daughter of one of the most important men in Verona. In this case she would have to keep her marriage a secret, as she is not a free citizen at all. Romeo's speech of lines 43-52 describes Juliet. Shakespeare has taken such care to describe Juliet as Romeo describes Juliet because he uses rhyming couplets, "So shows a snowy dove trooping with crows, as yonder lady o'er her fellow shows." Shakespeare must establish that Juliet must be described beautifully about Romeo and Juliet's speech. The effect of imagery in the description of Juliet shows that she is beautiful and mysterious. Romeo's fluency suggests that he has feelings for Juliet and not Rosaline. The sense of romance is added to the scene here by the description of Juliet, and Romeo's feelings for her. After, Tybalt and Capulet have an argument about Romeo. Shakespeare conveys Tybalts anger by using rhyming couplets, "A villain that is hither come in spite...night." We have seen Tybalt like this at the start of the play where he attempts to start a fight and the prince ends up telling him that 'if our families fight again then they would pay with their lives.' ...read more.

As soon as the nurse mention Romeo is a Montague, Juliet got shocked and said, "My only love sprung from my only hate, too early seen unknown, and known too late." A sense of danger is added to these lines because they are both from a different city, Romeo is a Montague, and Juliet is a Capulet. Both Romeo and Juliet speak in rhyming couplets when they realise who each other is. The effect of this rhyme suggests a romance in the scene. Luhrmann presents Juliet's reaction by the end of the text comparing with the end of the scene. The end of the scene is shortened and shows many secrets in the play. Also, at the end Tybalt makes a promise to kill Romeo. This tension is sustained right to the end, and creates a sense of danger. In conclusion, Shakespeare uses metaphors, rhyming couplets, etc. to create a sense of tension, danger in every scene of the play, such as Tybalts speech, Romeo's identity, and when Romeo and Juliet first meet. Overall, Luhrmann's interpretation of the scene was successful in my opinion because it was easier to communicate different emotions in the scene as it directs the point to the reader. He also creates a modern version of the play which makes it easier for people today to understand and get involved with the play. He uses metaphors and rhyming couplets to make the version interesting and thrilling as the play is about intense romance and danger. ...read more.