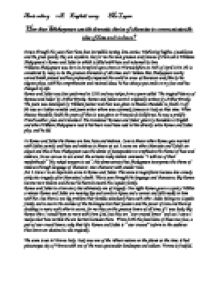 Romeo and Juliet. How does Shakespeare use the dramatic device of character to communicate the idea of hate and violence?

How does Shakespeare use the dramatic device of character to communicate the idea of hate and violence? Down through the years there have been incredible moving love stories, Wuthering heights, Casablanca and the great Gatsby they are excellent, but for me the most greatest and famous of them all is Williams Shakespeare's Romeo and Juliet in which is filled with hate and redeemed by love. Williams Shakespeare was born in Stratford upon-Avon in Warwickshire on 26th of April 1564. He is considered by many to be the greatest dramatist of all times and I believe that Shakespeare works earned lavish praised and has profoundly impacted the world in areas of literature and film by his elegant plays, with his comprehensive and rational ideas, he has always put smile on my face and has changed my life. Romeo and Juliet was first performed in 1595 and was taken form a poem called `The tragical history of Romeus and Juliet' by Arthur Brooke. Romeo and Juliet weren't originally written by Arthur Brooke. The poem was developed by William painter and then was given to Matteo Bandello to finish It off. He was an Italian novelist and poem writer whom was extremely famous in Italy at that time. When Matteo Bandello finish the poem off then it was given to Fran�ois de belleforest, he was a prolific French author, poet and translator. He translated 'Romeus and Juliet' given by Bandello to English and when William Shakespeare read it his heart must have said to him directly write Romeo and Juliet play, and he did. In Romeo and Juliet the themes are love, hate and violence. ...read more.

This makes Tybalt even more furious but Romeo will not react, calls him a ''Good Capulet''. I do protest I ''never injured thee, But love thee better than ... know the reason of my love. And so, good Capulet-which name I tender as dearly as my own-be satisfied'' Tybalt does not want to hear any of this from Romeo and he is obviously agitated by Romeo's reasoning. He tells Romeo that his new found reasoning does not excuse him for any of his wrong doings and orders him to turn and draw. Romeo protests saying that he never has injured Tybalt and insists that he could never fight against a Capulet, which is a name I love like my own name-you should be satisfied with what I say. It's up to Mercutio to take up the fight. And then Mercutio approaches Tybalt by saying ''Tybalt, you ratcatcher, will you walk?'' Which means you rat-catcher will fight me? And this is where Tybalt become furious and annoyed, but he controls his nerve and then Mercutio say this 'Will you pluck your sword out of his pilcher by the ears? Make haste, lest mine be about your ears ere it be out.' Saying Will you pull your sword out of its cover? Hurry up, or I'll smack you on the ears with my sword before you have yours drawn. This is where he become extremely ex-aspirated and hotheaded in blistering sunny atmosphere in Italy so then Tybalt replies '' I am for you'' I will fight you, shows that he is happy to fight any Montague. The fight starts and Romeo calls his cousin 'Mercutio' 'Gentlemen, for shame! ...read more.

Romeo loved Rosaline, but as soon as he saw Juliet he drop Rosaline like a stone. Romeo tells Juliet this, when she saw her for the first time ''Did my heart love till now?'' Did my heart love someone before this moment? 'Call me but love, and I'll be new baptized.' He says he will do anything for her even willing to sacrifice himself. Romeo and Juliet are the only loving characters in the play, which shows the juxtaposition with the other characters like Mercutio and Tybalt who portrait hate and violence and are violent which contrasts with them of love. Mercutio is a Montague and best friend to Romeo, he is brave and his speeches are imaginative and he often uses his language playfully and sometimes dirty, in some way he is a Montague version of Tybalt, as he is keen to pick fight and he is very out going and loves entertainment. Tybalt is a Capulet and a really aggressive character indeed, he is interested in fighting the Montague and everything he talks about is against the Montague's and always shows his anger and hatred Toward Romeo's family. And finally I thought that Shakespeare was inspirational, imaginative with his genius realization. The way he uses the characters to communicate the idea of hate and violence he was absolutely outstanding and break taking. After reading all the main plots, I spotted a excellent imagination used by William Shakespeare during the play was that He used 'Benvolio's' as a peace keeping for the Montague's but he didn't use any peace keeping for the Capulet, however I thought if he did used one for the Capulet's then it was going to be a peaceful ending. ?? ?? ?? ?? 1 Amir salimy 10E English; essay Ms.Logan ...read more.