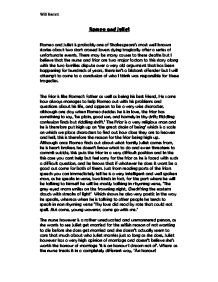 Romeo and Juliet Romeo and Juliet is probably one of Shakespeare's most well known stories about two start crossed lovers dying tragically after a series of unfortunate events. There may be many causes to these deaths but I believe that the nurse and friar are two major factors to this story along with the two families dispute over a very old argument that has been happening for hundreds of years, there isn't a blatant offender but I will attempt to come to a conclusion of who I think was responsible for these tragedies. The friar is like Romeo's father as well as being his best friend, He some how always manages to help Romeo out with his problems and questions about his life, and appears to be a very wise character, although one day when Romeo decides he is in love, the friar has something to say, 'be plain, good son, and homely in thy drift; Riddling confession finds but riddling shrift.' The Friar is a very religious man and he is therefore put high up on 'the great chain of being' which is a scale on which we place characters to find out how close they are to heaven and h**l, this is therefore the reason for the friar being high up. Although once Romeo finds out about what family Juliet comes from, he is heart broken, he doesn't know what to do and even threatens to commit suicide, this puts the friar in a very difficult position and ...read more.

How long is it now to Lammas-tide?' We find that the Friar and the Nurse are used well to move the plot of the play forward. They constantly rush everything in the play which adds excitement and curiosity to the play. They also seem to be the two who want everything to move along quickly without hesitations. Shakespeare gives the play a lot of themes, and he explores these themes very well, for example, there is the class theme involved like the difference between the nurse and the friar and yet they have the same sort of relationship and the same sort of friendship with Romeo and Juliet. Another theme that is explored very well is Love as throughout Romeo and Juliet have very strong feelings for each other. There are also the themes of regret, sadness and sorrow as the friar regrets a lot of the decisions he's made about marrying Romeo and Juliet. I would say that the main theme of the play is the rushing of it all, everything that takes place in this play happens over a very short amount of time and this is a very rushed and paced play, as you have the friar wanting to rush it along to see the outcome to whether or not he is found guilty of what he is doing 'Saint Francis be my speed! How oft tonight have my old feet stumbled at graves!' ...read more.

At number two I would have placed the friar as I believe that he is one of the main culprits as he Is the one that made the decision of marrying the couple. Although at number one I would have put Romeo and Juliet as they were the ones that should have known that they couldn't have had anything to with each other, but for the reason of love they still got involved with each other, this is why I believe they are the main reason for their deaths because they knew what they were doing was wrong but they still did it. Another reason for these two being the main reasons was because throughout at different times they were both very immature about the matter at hand, Romeo for example threatening to commit suicide at the thought of not being able to be with Juliet, all in all I believe these teenagers were very selfish about what they wanted and seemed to have no consideration for what effect these actions would have on others. Overall I found the play very interesting and constantly kept me interested, I would definitely recommend this to people, the only problem I had with the play was it being written in old English which I had trouble to understand, but after a while I did get the hang of it and it began to make more sense, in all a very deep and meaningful play. ?? ?? ?? ?? Will Barrett ...read more.