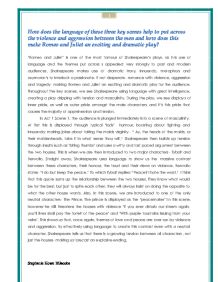 How does the language of these three key scenes help to put across the violence and aggression between the men and how does this make Romeo and Juliet an exciting and dramatic play? 'Romeo and Juliet' is one of the most famous of Shakespeare's plays, as his use of language and the themes put across s appealed very strongly to past and modern audiences. Shakespeare makes use of dramatic irony, innuendo, metaphors and oxymoron's to interlock a passionate- if not desperate- romance with violence, aggression and tragedy- making Romeo and Juliet an exciting and dramatic play for the audience. Throughout the key scenes, we see Shakespeare using language with great intelligence, creating a play dripping with tension and masculinity. During the play, we see displays of inner pride, as well as outer pride amongst the male characters, and it's this pride that causes the majority of apprehension and tension. In Act 1 Scene 1, the audience is plunged immediately into a scene of masculinity. At first this is displayed through typical 'lads' humour, boasting about fighting and innuendo; making jokes about taking the maids virginity- " Ay, the heads of the maids, or their maidenheads, take it in what sense thou wilt." ...read more.

more shows the honour that the houses posses and that the characters have so much pride that even in death they will not admit defeat. In his dying moments, Mercutio cures both of the houses "A plague o' both your houses!"- signifying that things will get a great deal worse from this point onwards, sending the play into a new level of tragedy. This new level of tragedy also sets in motion a change in Romeos character. Romeo no longer remains a peacemaker as portrayed in previous scenes, but now he becomes possessed with hatred and revenge. This revenge shows us that Romeo holds a great deal of honour upon his house, and he will do anything- even kill a man- to uphold the family's name. Tybalt leaves and Romeo swears revenge and so chases after Tybalt and kills him. After this news Prince Escalus banishes Romeo from Verona. Throughout this scene, we can see that Shakespeare changes how the characters address each other. Before Mercutio's death, all characters speak in prose but after his death, characters speak in blank verse. This could be to signify a change in Romeo, and his outlook, as up to this point, Romeo has been an optimist but we see his change greatly into a darker character after the death of his best friend. ...read more.